An Alternative Representation of Stomatal Conductance in a Dynamic Vegetation Model 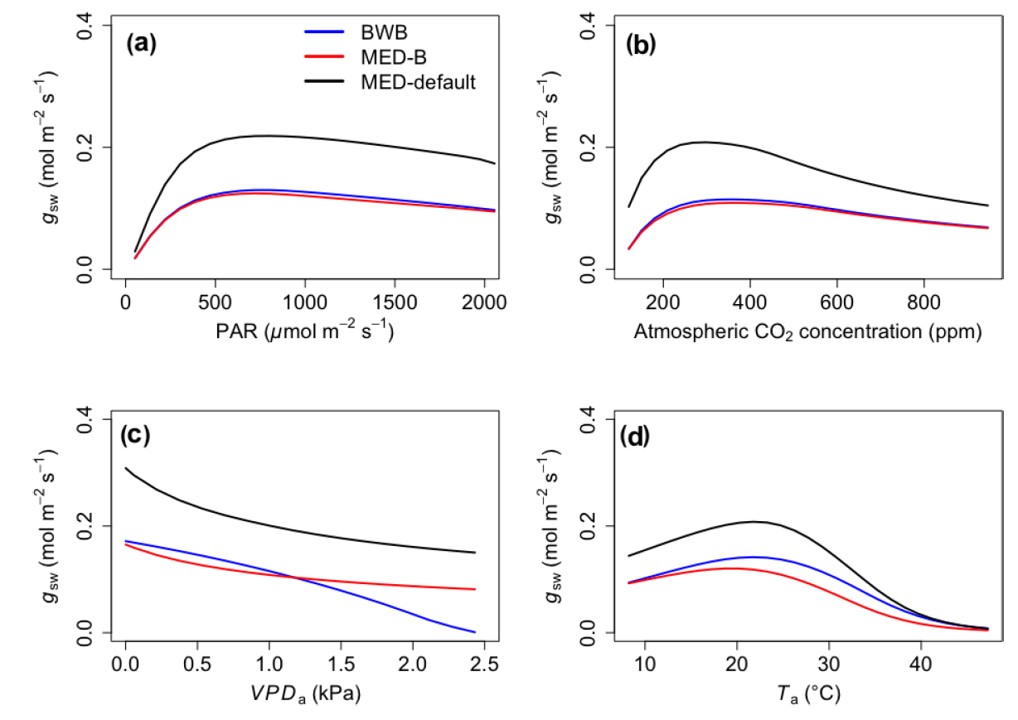 Responses of stomatal conductance (gsw) to scenarios with (a) radiation, (b) CO2, (c) VPDa, and (d) Ta for the three model setups: BWB (blue), MED-B (red), and MED-default (black).

Stomata control the movement of water and CO2 between the atmosphere and the leaf balancing water lost through transpiration and carbon dioxide taken up by photosynthesis. The flux of water vapor through the stomata is called stomatal conductance. This study compared and evaluated two model representations of stomatal conductance in the Functionally Assembled Terrestrial Ecosystem Simulator (FATES) and demonstrated each model’s efficacy for modeling carbon and water exchanges in a tropical forest.

Global climate change will result in a hotter, drier, and CO2-enriched environment. Because stomata are the gatekeepers of carbon and water exchange, representing their function accurately in models is key to improving projections of plant responses to global change. This study showed that both models of stomatal function performed well but differed in their responses in dry air, with their responses to dry soil conditions being the biggest driver of uncertainty.

Stomata play a central role in regulating the exchange of carbon dioxide and water vapor between ecosystems and the atmosphere. Their function is represented in land surface models by stomatal conductance models. The Functionally Assembled Terrestrial Ecosystem Simulator (FATES) is a dynamic vegetation demography model that can simulate both detailed plant demographic and physiological dynamics. This study implemented an optimality-based stomatal conductance model—the Medlyn (MED) model and compared with previous FATES default Ball—Woodrow—Berry (BWB) model. To evaluate how the behavior of FATES is affected by stomatal model choice, a model sensitivity analysis was conducted to explore model response of stomatal conductance to climate forcing, including atmospheric CO2 concentration, air temperature, radiation, and vapor pressure deficit (VPD). Results showed that modeled stomatal conductance values varied greatly between the BWB and MED formulations due to the different default stomatal slope parameters. After harmonizing parameters for both model formulations, this study found that the divergence was limited to conditions when the VPD exceeded 1.5 kPa. Evaluations of model simulation results against measurements from a wet evergreen forest in Panama showed that both model formulations were able to simulate the carbon and water exchange in the tropical forests well, except under dry conditions. Thus, this research suggests that the current model representation of soil water stress effects should be used with caution.

This work was part of the Next Generation Ecosystem Experiments (NGEE)–Tropics, which is funded by the Biological and Environmental Research (BER) Program within the Department of Energy’s (DOE) Office of Science.