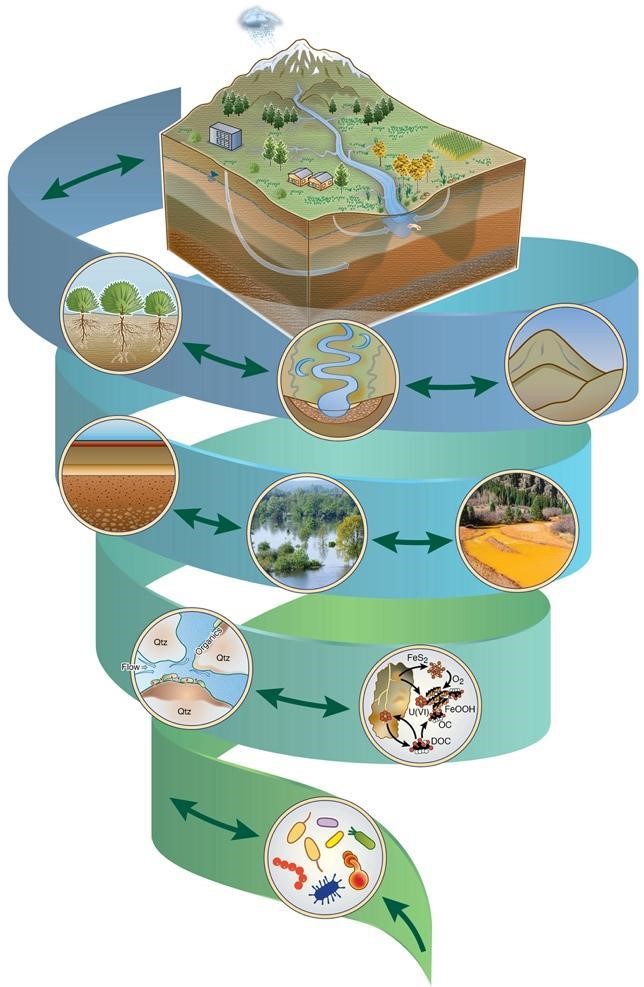 From subsurface microbiology to above-ground ecosystem cycles and functioning, the progression of DOE-supported science has advanced understanding of environmental features and how they interact at different levels and scales.

Accessible and clean freshwater resources, including groundwater and prominent rivers worldwide, are dwindling because of contaminant and nutrient loads. Understanding how various contaminants move through and affect the environment is key to ensuring water security. For decades the Department of Energy (DOE) has significantly contributed to the progress of environmental sciences and has addressed challenges affecting Earth’s subsurface, such as treating radioactive waste and toxic chemicals in the environment. A review of DOE-supported research conducted over the past two decades reveals insights that can be applied worldwide to examine the fate and effect of various contaminants and nutrients in freshwater systems.

An estimated 65 percent of the human population lives in water-stressed regions. Freshwater resources supporting millions of people are becoming increasingly contaminated, posing a serious problem to developing a water-secure future. In this review, researchers summarized approximately 500 DOE-funded articles published from the late 1990s to present day. The team explored implications of findings ranging from microbiology to large-scale ecosystem nutrient and chemical functioning to recommend future research directions. This review article is the first of its kind, referring to information gained across seven DOE research sites –the Savannah River Site in South Carolina, Oak Ridge Reservation in Tennessee, Hanford in Washington, Nevada National Security in Nevada, Riverton in Wyoming, and Rifle and East River in Colorado – to synthesize the DOE Biological and Environmental Research (BER) Program’s leading contributions to ecosystem sciences. This review also demonstrates how improved understanding of ecosystem functioning – from the subsurface to the atmosphere – has advanced knowledge critical to address issues of water contamination.

Water security is critical for human health, food and energy production, and economic development. As the Earth’s population reaches nine billion, the demand for freshwater resources has intensified. However, climate change may lead to changes in hydrology and disturbances, such as wildfires, droughts, floods, and land-use changes, that can impact water availability and quality. DOE-funded research has significantly contributed to progressing environmental sciences since the late 1980s. Findings from this research have addressed groundwater quality issues, such as treating radioactive waste and toxic chemicals. These efforts have developed an advanced understanding of ecosystem processes, valuable field monitoring strategies, predictive capabilities, and approaches that consider data at different scales to efficiently tackle the complexity of Earth’s ecosystems. Researchers have synthesized and documented these scientific advancements to generalize and apply them to a range of global water security problems.

This material is partly based upon work from the Watershed Function Scientific Focus Area (SFA) and the ExaSheds project, which are supported by the Biological and Environmental Research (BER) Program within the U.S. Department of Energy’s (DOE) Office of Science.