Warming increases photosynthesis in tamarack trees but not in black spruce. 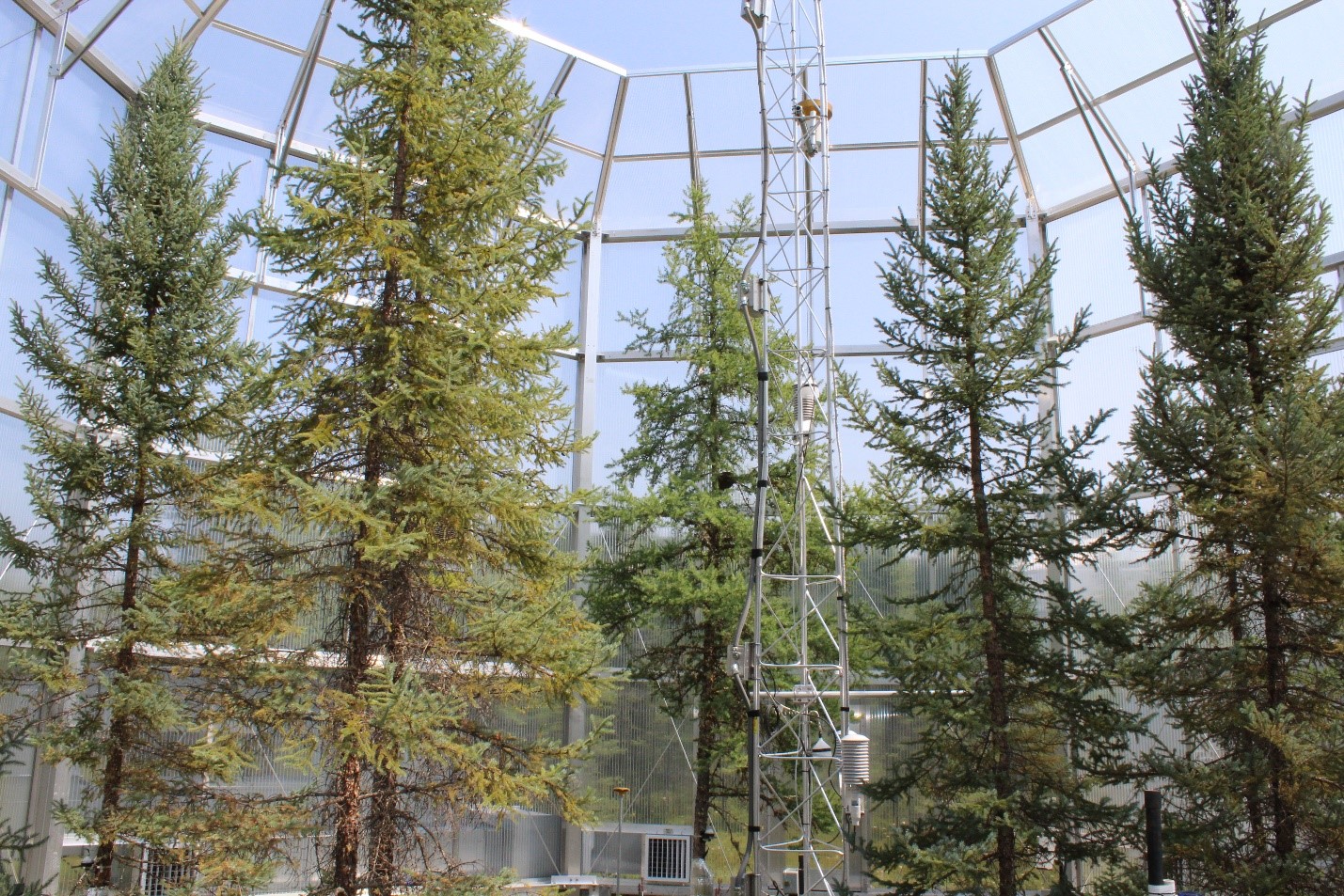 Researchers measured leaf photosynthesis, respiration, and nitrogen content of mature boreal trees in the Spruce and Peatland Responses Under Changing Environments (SPRUCE) whole ecosystem warming enclosures, one or two years after treatments began. Over time, tamarack trees displayed increased photosynthesis with warming, due to higher nitrogen content and by keeping their stomatal pores open to allow for CO2 uptake by the leaves. In contrast, the black spruce trees reduced their stomatal pore opening, and photosynthesis did not change with temperature. Respiration rates were not down regulated with warming, indicating a lack of acclimation, thus higher temperature led to greater rates of carbon use by respiration.

Tree species that increase photosynthesis and reduce respiration with warming will display greater net carbon uptake and thus benefit by temperature increases. Since only tamarack trees increased photosynthesis, and neither tree species reduced respiration, the tamarack trees may have more carbon available for growth, maintenance, and defense than black spruce trees. This, in turn, could affect relative rates of success and, over time, impact the balance of species in the ecosystem with implications for carbon sequestration.

The decade-long SPRUCE experiment consists of five warming treatments (+0 to +9°C) with or without the addition of elevated CO 2 (+500 ppm) in a southern boreal bog ecosystem. Enclosures warm the air and deep belowground, providing scientists a glimpse of potential futures. Results from this work demonstrate that increased growth temperatures, in the range expected for the next century at high latitudes, have contrasting effects on stomatal behavior, photosynthetic performance, and respiration of two common boreal tree species in North America. These factors could affect the future growth and competitive ability of the trees. Though both species had higher leaf nitrogen in the warmer plots, tamarack was better able to maintain photosynthetic performance under warmer, drier conditions than was black spruce, due to different stomatal behaviors. This implies that tamarack may be better able to maintain favorable carbon balance and growth under warmer climates, provided that soil water is available. However, by maintaining greater stomatal pore opening in tamarack, the trees will use more water, which could lead to water stress and increased sensitivity to drought in the future. These data suggest that species-specific responses to future climate change may dictate how forest carbon and water fluxes change over the next few decades in boreal forests.

This research was supported by the Office of Biological and Environmental Research (BER), within the U.S. Department of Energy’s (DOE) Office of Science. Oak Ridge National Laboratory is managed by UT-Battelle, LLC, for the DOE.