Researchers found that degraded forests (burned and logged) do less photosynthesis during the dry season but recover in about 4 years. 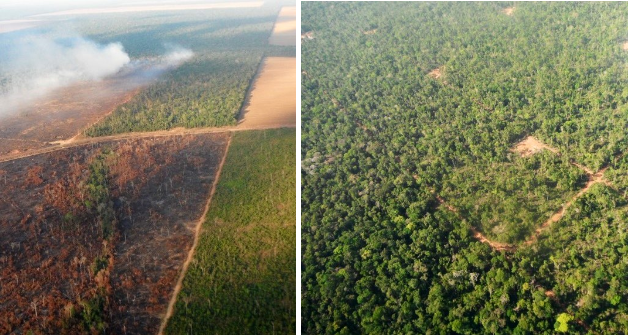 Large areas of the Amazon Forest are being degraded through fires and logging. Using multiple remote sensing data, researchers tested whether degraded forests suffer more water stress than intact forests during the dry season. By comparing datasets of forest structure and photosynthesis, researchers evaluated how long it takes for forests to recover following disturbance.

Humans cause disturbances, such as selective logging and fires, that degrade tropical forests, which alters forest structure and function. These changes also impact the ability of forests to uptake carbon. This study used airborne laser scanning data over the Amazon to investigate how forest structure varies across burned and logged forests of different ages since disturbance. The team also used solar-induced chlorophyll fluorescence (SIF) data from the TROPOspheric Monitoring Instrument (TROPOMI) mission. SIF is a proxy for photosynthesis, and the TROPOMI data provide information on how photosynthesis varies across seasons in degraded and intact forests.

The researchers found that forest fires suffered the largest changes in the vertical distribution of foliage and canopy height compared to logged and intact forests. Moreover, SIF in recently burned forests were significantly lower than in intact forests. In contrast, within 4 years after the disturbance, SIF values were higher in regenerating forests than in intact forests despite their lower leaf area. These findings highlight that degraded forests recover photosynthesis rates faster than they recover forest structure. The results also indicate that degraded forests can accumulate large amounts of carbon during recovery from disturbance.

This research was funded by the Australian Government Research Training Program Scholarship, the USDA Forest Service Pacific Northwest Research Station and International Programs, and the Next Generation Ecosystem Experiments-Tropics, funded by the Biological and Environmental Research (BER) Program within the U.S. Department of Energy’s (DOE) Office of Science. The research carried out at the Jet Propulsion Laboratory, California Institute of Technology, was under a contract with NASA.