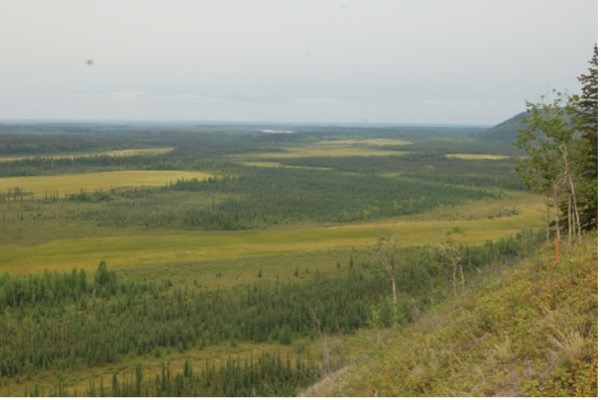 Black spruce permafrost forest (dark green areas) and thermokarst bogs (light green areas) where permafrost has thawed; the land has subsided and transformed from a forest into a bog. Location near Fairbanks, AK, where research was performed.

Methane is a greenhouse gas with a greater ability to warm the earth than carbon dioxide. Wetlands are the largest natural source of methane to the atmosphere. Working in a wetland that formed due to permafrost thaw, scientists used multiple methods to identify how wetland plants influence the amount of methane: generated by soil microbes (called production), converted by soil microbes into carbon dioxide (called oxidation), and transported from soil to the atmosphere (called emission). Plants appeared to increase methane production and to surprisingly decrease methane oxidation. Scientists created a theory for why plants increased methane emissions.

In a permafrost‐thaw bog in Interior Alaska, scientists sought to disentangle mechanisms by which vascular vegetation affect methane emissions. Vegetation operated on top of baseline methane emissions, which varied with proximity to the thawing permafrost margin. Emissions from vegetated plots increased over the season, resulting in cumulative seasonal methane emissions that were ~4.5 g m−2 season−1 greater than unvegetated plots. Mass balance calculations signify these greater emissions were due to increased methane production and decreased methane oxidation. Minimal oxidation occurred along the plant‐transport pathway, and oxidation was suppressed outside the plant pathway. Suppression of methane oxidation was stimulated by root exudates fueling competition among microbes for electron acceptors. This contention is supported by the fact that methane oxidation and relative abundance of methanotrophs decreased over the season in the presence of vegetation, but methane oxidation remained steady in unvegetated treatments. Oxygen was not detected around plant roots but was detected around silicone tubes mimicking aerenchyma, and oxygen injection experiments suggested that oxygen consumption was faster in the presence of vascular vegetation. Root exudates are known to fuel methane production, and this work provides evidence they also decrease methane oxidation.