Integrating Microbes into Our Understanding of Ecosystem Carbon Cycling 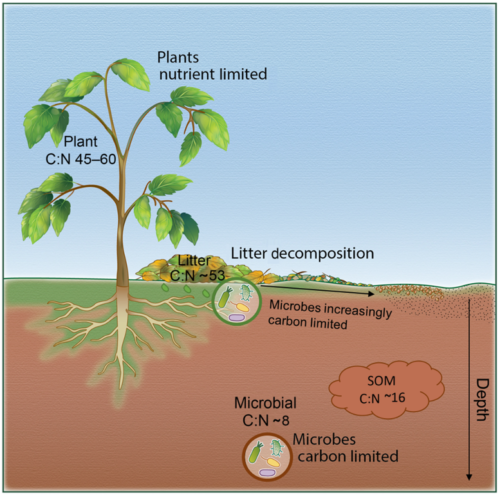 A simplified diagram depicting that heterotrophic soil microorganisms are primarily limited by carbon in the soil (brown), whereas plants are primarily limited by nutrients (green). Microbes with access to labile carbon in the fresh litter layer and rhizosphere may be nutrient limited (green). Carbon-nitrogen ratios are reported averages from global datasets compiled by Xu et al. (2013) and Yuan and Chen (2009).

Researchers from Lawrence Berkeley National Laboratory make the case for the explicit recognition of the carbon limitation of soil microbes to improve models of whole ecosystem responses to non-steady state conditions.

Numerous studies have shown that fertilization with nutrients such as nitrogen, phosphorus, and potassium increases plant productivity in both natural and managed ecosystems, demonstrating that primary productivity is nutrient limited in most terrestrial ecosystems. In contrast, heterotrophic microbial communities in soil are primarily limited by organic carbon or energy. While this concept of contrasting limitations of microbial carbon and plant nutrient limitation is based on strong evidence, it is often ignored in discussions of ecosystem response to global environment changes. To truly integrate carbon and nutrient cycles in ecosystem science, models must account for the fact that while plant productivity may be nutrient limited, heterotrophic communities are inherently carbon limited. The research team outlines how models aimed at predicting non-steady-state ecosystem responses over time can benefit from dissecting ecosystems into the organismal components and their inherent limitations to better represent plant-microbe interactions in coupled carbon and nutrient models.

This work was funded by the European Research Council Synergy grant Imbalance-P #610028, and by the Terrestrial Ecosystem Science Program by the Office of Science, Office of Biological and Environmental Research, of the US Department of Energy under contract DE-AD01-05CH11231.