The strategies trees use to gain nutrients lead to differences in microbial diversity and function in a temperate forest. 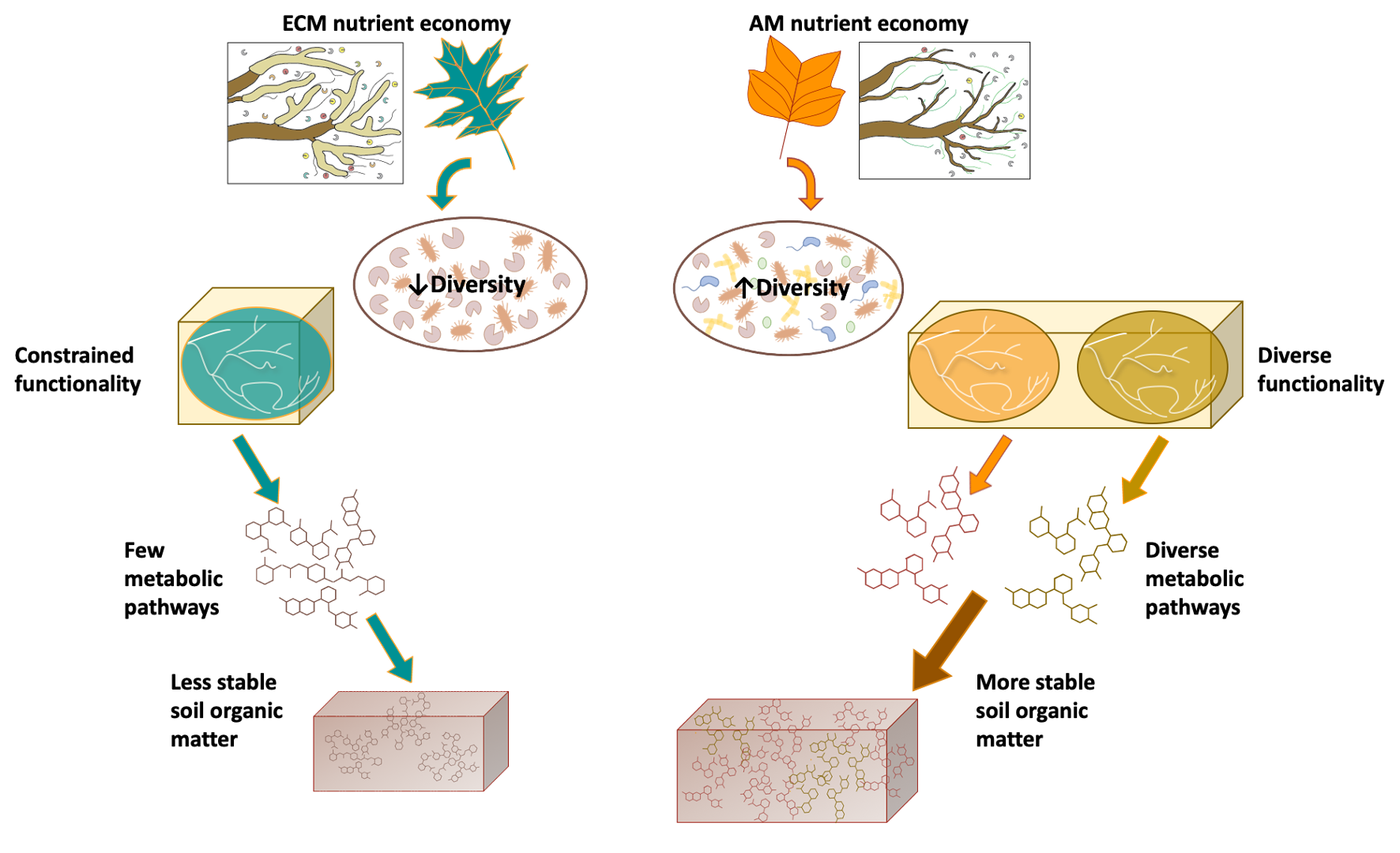 Conceptual model of how nutrient economies impact microbial diversity and the composition of soil organic matter.

Temperate forest trees have different strategies to acquire the nutrients they need. Researchers found that these different strategies can influence bacterial and fungal diversity in soil. They incubated soils with leaf litter traced into bacteria and fungi that were breaking it down. Results showed that more diverse bacterial and fungal communities used the leaf litter and produced more varied products than products from the less diverse communities.

These results advance current understanding of how the strategies trees use to gain nutrients can influence which bacteria and fungi are in the soil and what they are doing. Further, these results show that diverse bacteria and fungi produce more diverse products when they consume leaf litter. These diverse products are sticky and can stay in the soil longer, which may store carbon in the soil rather than be released to the atmosphere.

Microbial decomposition transforms plant litter into microbial products that can remain in the soil and keep carbon (C) from returning to the atmosphere. Recent theories have suggested that decomposition depends on what type of carbon compounds enter the soil and how they impact the diversity of microbes and their function. This research explicitly tests these theories by using (1) quantitative stable isotope probing, which makes it possible to trace isotopically labeled litter into different microbial species as they are consumed, and (2) metabolomics, which enables researchers to see how the microbes transform this litter into new metabolic products that could stick in the soil. In both cases, the litter that is heavier in 13C than the more common 12C essentially acts as a dye that can be traced through the soil at fine scales. Results showed that differences in how trees gain nutrients through two types of helper fungi called mycorrhizae led to arbuscular mycorrhizal (AM) soils harboring greater diversity of fungi and bacteria than ectomycorrhizal (ECM) soils. When incubated with two types of 13C enriched litter that varied in how easily they are broken down, researchers found that the more diverse microbes in AM soils shifted their decomposition pathways depending on how easy the litter was to eat. Essentially, who was eating the litter and what products were changed by litter type. By contrast, the decomposition pathways were more static in the less diverse ECM soil. Importantly, the majority of these shifts were driven by species only present in the AM soil, suggesting a strong link between microbial identity and their ability to decompose and assimilate substrates. Collectively, these results highlight an important interaction between ecosystem-level processes and microbial diversity, whereby the identity and function of active decomposers impact the composition of decomposition products that can form stable soil C.

This research was supported by the Department of Energy (DOE) award DE-SC0019472. Soil organic matter analysis was conducted with support provided by the DOE’s Environmental Molecular Sciences Laboratory (EMSL) via rapid access proposal 49880.