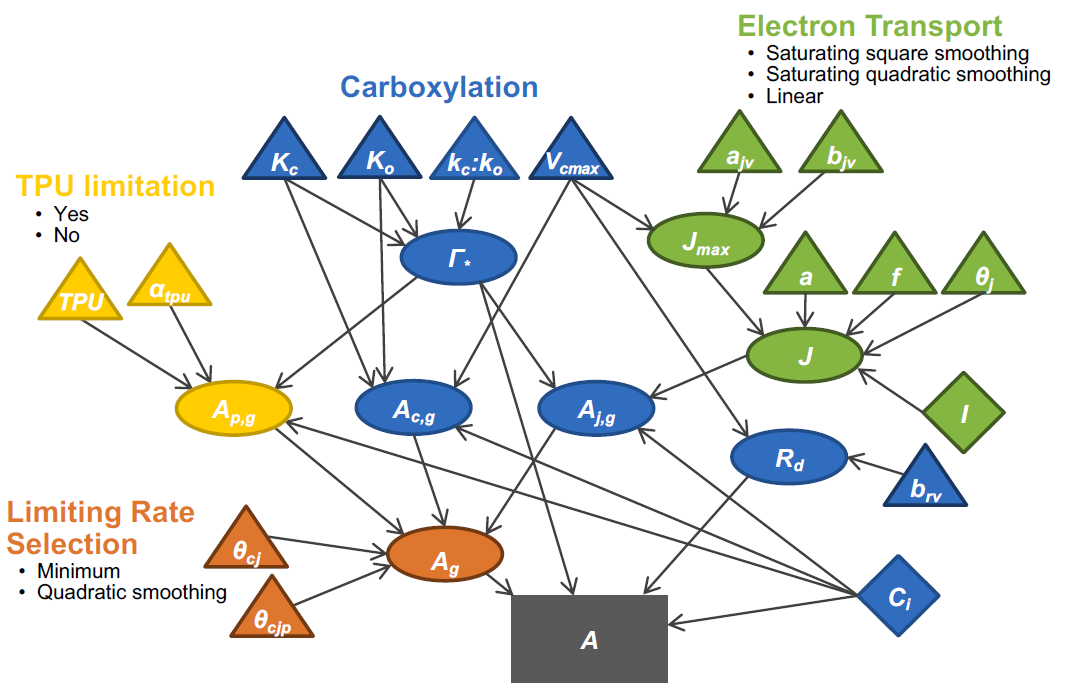 Diagram of photosynthesis model to calculate net carbon assimilation (A, μmol m−2 s−1, grey rectangle). Inputs (diamonds), parameters (triangles), functions (ellipses) and target state variable (rectangle) are shown, as is the breakdown on the model into the four processes (colours; limiting‐rate selection, carboxylation, electron transport and triose phosphate use). Arrows represent the flow of information from distal parts of the model (inputs and parameters), through intermediate functions to the end goal.

Scientific hypotheses describe how processes might work in the natural world. Computer models are built from mathematical descriptions of these hypotheses. Alternative hypotheses are common, especially in environmental sciences, yet most computer models cannot easily switch among these alternative hypotheses. With funding from the U.S. Department of Energy, scientists have developed a new model that can switch between hypotheses and prioritize which process to study further, a “multi-hypothesis model.” Using the model to study common leaf photosynthesis models, scientists found the surprising importance of a process that has previously received little attention. New data were then collected to discriminate among the alternative hypotheses, finding support for the more traditional approach.

Leaf photosynthesis models simulate the rhythms of carbon dioxide (CO2) transfer from the atmosphere to plants. This study highlights a key shortfall in photosynthesis modeling and in the general approach to developing and using predictive models of the terrestrial biosphere. Models can reach the same endpoint in multiple ways, leading to models “getting it right for the wrong reasons.” The multi-hypothesis approach will help to identify key processes causing model differences and evaluate alternative hypotheses to describe those processes, ultimately leading to more robust predictions of terrestrial ecosystems.

Leaf photosynthesis models are the beating heart of global carbon cycle models. These photosynthesis models simulate the rhythms of CO2 transfer from the atmosphere into plants and terrestrial ecosystems. The reigning king of photosynthesis models is the Farquhar model published in 1980. However, despite its almost ubiquitous use, there are a number of variations in how the mechanics of various component processes are mathematically described (i.e., there are various mathematical hypotheses that describe some of the sub-processes within the overarching Farquhar model). The consequences of these alternative choices have never been formally investigated, in part because methods to formally investigate model sensitivity to variation in how processes are represented have only recently been developed. Novel multi-hypothesis modeling methods were applied to investigate the influence of 14 parameters and four processes with alternative representations in photosynthesis models, finding the surprising dominance of a process that has not been extensively evaluated with data. Running the alternatives of this dominant process in global models resulted in a difference in photosynthesis equivalent to annual human CO2 emissions. This multi-hypothesis model evaluation identified as important two alternative hypotheses for photosynthetic limiting rate selection. Novel, high-resolution photosynthesis measurements were designed and undertaken to discriminate among these hypotheses. General support for the original Farquhar implementation was found and is recommended for use to reduce uncertainty in global photosynthesis simulations.