Predicting the Future of Forests 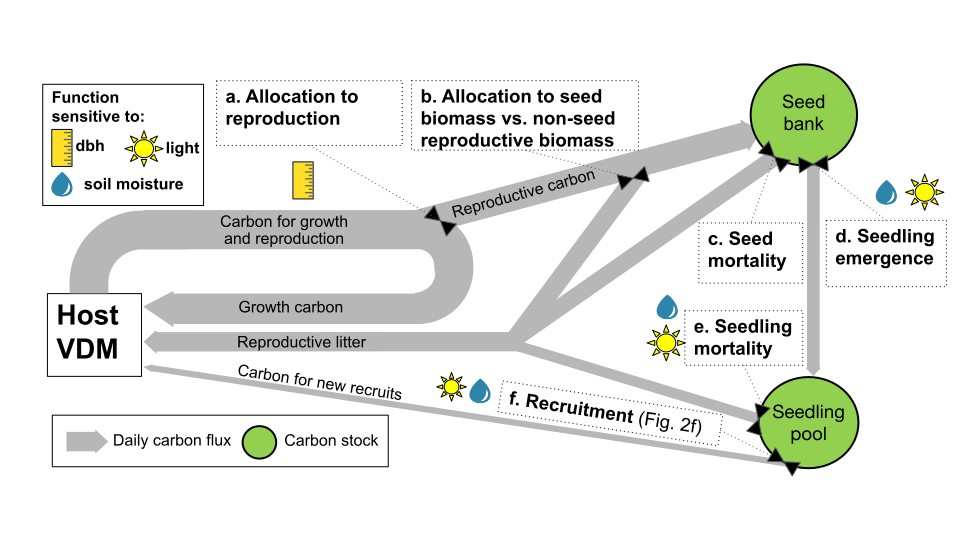 Forests will only persist where future trees are able to reproduce, disperse, germinate, and grow into mature trees (i.e., “recruit”). These critical regeneration processes are generally not represented in models ecologists use to predict future forests. The recently developed Tree Recruitment Scheme (TRS) was created specifically to capture how changing environmental conditions will affect future trees’ ability to recruit. The TRS was shown to not only improve predictions of tree recruitment rates in a tropical forest in Panama but also capture how reduced soil moisture and light constrain tree recruitment.

By enhancing predictions of tree recruitment using environmentally sensitive processes, the TRS is well-positioned to improve predictions of future forest range boundaries, composition, and function. This advancement is important for predicting the role that forests will play in sequestering and storing carbon, promoting biodiversity, and provisioning critical natural resources. By representing the early stages of tree development, the TRS will allow ecosystem modelers to simulate more complicated interactions between vegetation and changing disturbance regimes, such as the effect of more severe fire on vegetation composition.

The TRS was developed and evaluated at Barro Colorado Island (BCI), Panama, where ecologists have collected a significant amount of forest demography and meteorological data since the early 1980s. These data allowed researchers from the Next-Generation Ecosystem Experiments-Tropics (NGEE-Tropics) to parameterize TRS algorithms that represent how soil moisture and light affect critical regeneration processes, such as seedling emergence, seedling mortality, and seedling to sapling transition rates. By simulating recruitment under observed meteorological conditions, researchers were able to compare TRS predictions of recruitment to census observations at BCI. Compared to prior models, the TRS made significant improvements in predicting which types of trees recruit and at what rate under the current climate. Additionally, by running the TRS under El Niño, wetter-than-observed, and drier-than-observed precipitation scenarios, researchers found that the TRS predicted recruitment responses to varying soil moisture and light levels that were consistent with ecological expectations.

Funding was provided via Next-Generation Ecosystem Experiments-Tropics (NGEE-Tropics), which is funded by the Biological and Environmental Research (BER) Program within the U.S. Department of Energy’s (DOE) Office of Science. Support was also received from the National Science Foundation and NASA during this research.