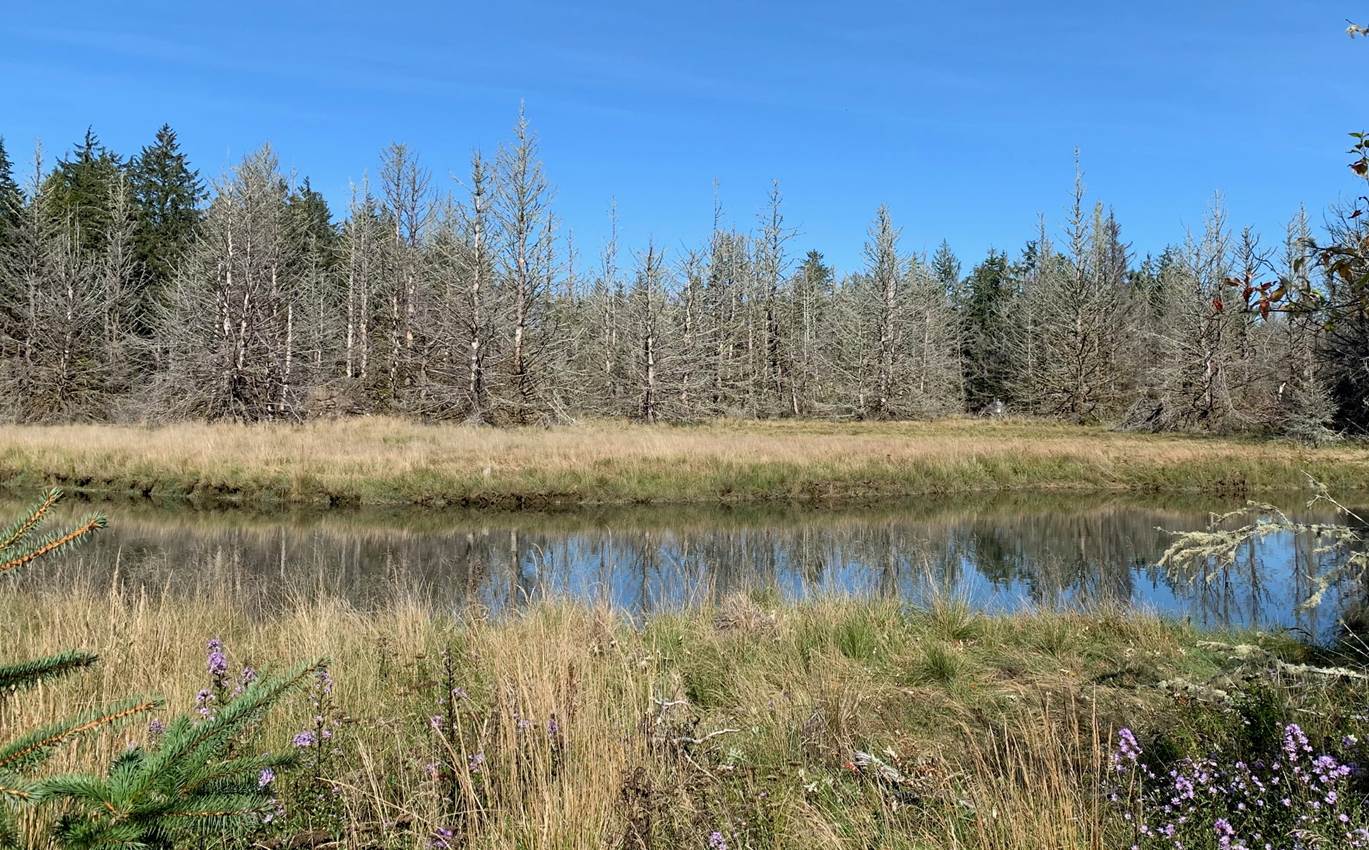 Increasing mortality rates of coastal woody plants is a conundrum, and researchers expect the rates to worsen as sea levels continue to rise. This study concentrated on a forested floodplain in the Pacific coast of Washington State that was exposed to seawater after a culvert was breached in November 2014 to allow salmon habitat restoration. The anomalous exposure caused rapid and widespread death of the forest. Hydraulic failure—the plant’s inability to move water from roots to leaves—was the immediate threat to the trees. However, rather than kill them outright, the small degree of hydraulic failure promoted carbon starvation through reductions in photosynthesis, eventually leading to mortality.

Coastal plant mortality is rising globally, leading to negative impacts on ecosystem services valued by society. Knowledge of the mechanisms leading to this mortality is in its infancy, which impairs researchers’ ability to make predictions about future coastal ecosystem loss. For the first time, scientists measured the key metrics of hydraulic failure and carbon starvation in trees that were dying from seawater exposure. The event was an anomaly, but it was indicative of what will likely happen as sea levels continue to rise. Results from the study will pave the way for improved understanding of coastal tree mortality, thus creating a pathway for model development that targets the key processes leading to coastal forest loss.

Coastal plant mortality is rising in concert with sea level, yet the mechanisms of mortality in these systems are untested. This lack of research leads to a large knowledge gap that subsequently precludes mechanistic prediction of future coastal ecosystem loss. In this study, scientists examined the key processes expected to kill plants—hydraulic failure and carbon starvation—in trees that experienced novel exposure to seawater. In November 2014, a culvert was breached below a forested floodplain along Beaver Creek in Washington State to increase salmon spawning habitat, resulting in seawater exposure that was unprecedented in the life of this forest. The ability to transport water within the plants was reduced within the first year of the event, leading to carbon starvation via photosynthetic loss. In short, carbon starvation was ultimately the dominant driver of mortality. These results pave the way for improved knowledge and model development for prediction of future coastal forest loss.

This work was part of the Coastal Observations, Mechanisms, and Predictions Across Systems and Scales–Field, Measurements, and Experiments (COMPASS-FME) project, which is funded by the Biological and Environmental Research (BER) Program within the Department of Energy’s (DOE) Office of Science. This research is also part of the PRedicting Ecosystem Resilience through Multiscale and Innovative Science (PREMIS) Initiative at Pacific Northwest National Laboratory (PNNL). It was conducted under the Laboratory Directed Research and Development Program at PNNL. Researchers were also supported by the National Natural Science Foundation of China (41977396); the European Union’s Horizon 2020 Marie Skłodowska-Curie Individual Fellowship (No. 844028); and the Swiss National Science Foundation (PZ00P3_174068).