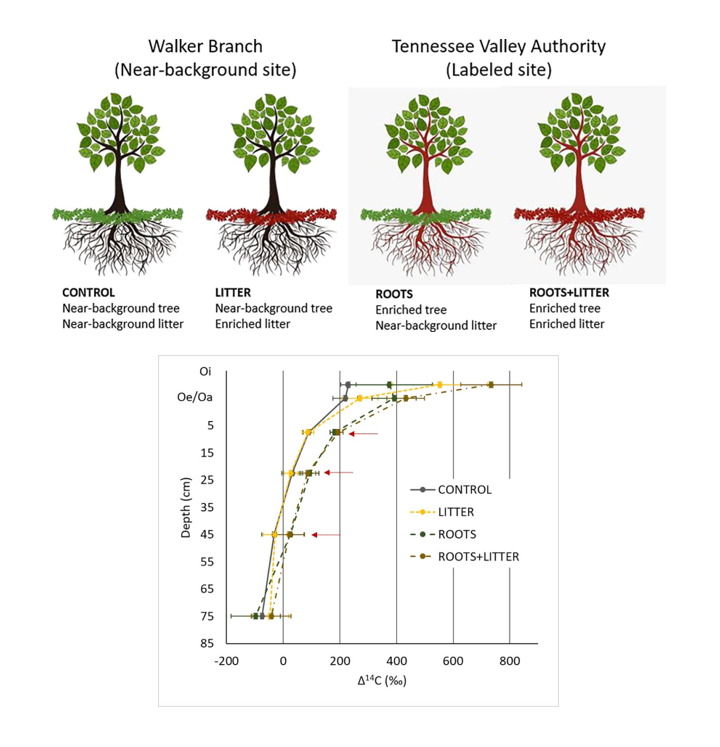 Experimental Design and Results. (Top) Illustration of four treatments, each treatment is named according to the primary source of radiocarbon label in the study (labeled source in red). (Bottom) Δ14C values averaged over time (2001–2004) for bulk soils with depth. Note how treatments visually group by site, and the clear separation between Walker Branch treatments (control, litter) and Tennessee Valley treatments (roots, roots + litter) indicated by red arrows.

A litter manipulations study based on enriched background levels of carbon-14 (14C) and their manipulation in an upland deciduous forest on the Oak Ridge Reservation enabled scientists to separate the fate of surface applied leaf litter from that of belowground root production and turnover. Detailed analysis of the fate of the enriched carbon (C) allowed scientists to trace C accumulation within these mineral soils.

To a large degree, the sources and stability of soil organic carbon remain poorly constrained. A clear understanding of links among the components of the soil C cycle is hampered by the complexity of the system as well as challenges associated with partitioning bulk soil C into meaningful fractions. A large accidental 14CO2 release at the Oak Ridge Reservation in Tennessee, USA provided a strong label pulse into adjacent, well-studied oak forests, resulting in highly elevated Δ14C values in leaf litter (~1000‰) and roots (~260–450‰). A four-year manipulative study was conducted to determine the relative contribution of litter versus roots to the bulk mineral soil C pool, as well as to free light, occluded light and heavy fractions. The heavy fraction was further split into fractions with densities of 1.7–2.4 g cm-3 and >2.4 g cm-3 to test the homogeneity of the mineral-associated fraction of C. Substantial concentrations of label were detected in all soil fractions within a year of the 14CO2 release, indicating rapid incorporation of newly fixed photosynthates in all fractions of soil organic C. This rapid incorporation of new carbon occurred only in treatments where roots were enriched, indicating that roots are the major source of inputs to mineral soil C stocks at these sites. Separation of the heavy fraction into subfractions of intermediate (1.7–2.4 g cm-3) and high (>2.4 g cm-3) density indicated that both subfractions incorporated label at similar rates, despite significant differences in degree of microbial processing. In general, the rate of label incorporation suggested a much faster turnover for all fractions than indicated by natural radiocarbon abundance values. This suggests that within each soil fraction there are portions of slow-cycling and fast-cycling materials, and the determination of an average turnover time or mean age is dependent on experimental approach. The rapid incorporation of label into all fractions within a year implies a high degree of heterogeneity in all fractions regardless of how finely the soils are partitioned. Further refinement of the nature and drivers of this heterogeneity could yield important insights into the soil C cycle.