Soil moisture thresholds explain a shift from light- to water-limited sap velocity during the 2015-16 El Niño drought in the Central Amazon. 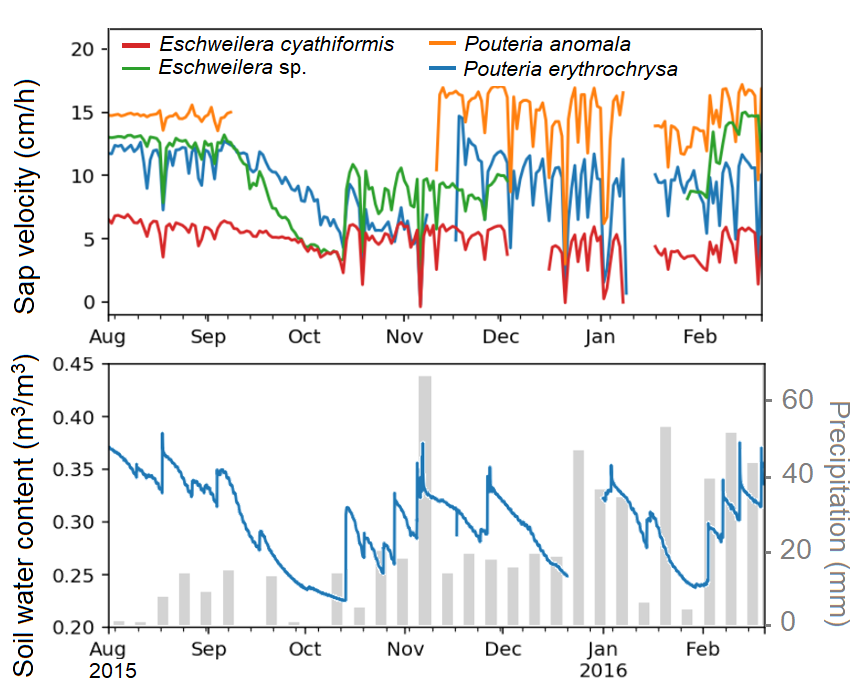 Dramatic drop in soil water content accompanied by a substantial decrease in sap velocity during the 2015-16 El Niño drought.

Transpiration is the process of water moving through a plant from soil to atmosphere. In humid tropical rainforest regions, soil water recharges during the wet season to support dry season transpiration, making transpiration considered light- but not water-limited. Scientists are unsure if tropical rainforests with abundant water will become water limited under extreme climate conditions. To address this uncertainty, a team of researchers from the Next Generation Ecosystem Experiment-Tropics (NGEE-Tropics) used field data to examine dynamics of transpiration, soil water, and meteorological variables during the record-breaking Central Amazon 2015-16 El Niño drought. The researchers found a shift from light- to water-limitation of sap velocity and identified a soil moisture threshold of water limitation in the Central Amazon.

This study suggests a progressively critical role of soil moisture under a drier future. This could happen in the Central Amazon and other places that were previously thought to have plenty of water. The soil moisture threshold provides a crucial benchmark to test and improve model simulations of future land-atmosphere feedbacks in the Amazon under climate change.

Researchers measured sap velocity, soil water content, and meteorological variables in an old-growth upland forest in the Central Amazon throughout the 2015-16 drought. A rapid decline in sap velocity and temporal variability was found during the drought, accompanied by a marked decline in soil moisture and an increase in temperature and vapor pressure deficit. To understand water or light limitation, researchers examined the covariation of sap velocity with soil water content and net radiation using partial correlation analysis. The study found that sap velocity was largely limited by net radiation during normal dry seasons but was limited by soil water during drought. To identify the timing of this shift, researchers used a moving window approach to conduct partial correlation analysis every 10 days and examined how the coefficient changed during the whole period. Water stress started to occur in late August to early September in 2015. The soil moisture control continued throughout September then became intermittent and disappeared after several rainfall events. During the strong water control period, the light control disappeared. The threshold of soil moisture was identified at 0.33 m3/m3 (around -150 kPa in soil matric potential).

This work was supported by the Next Generation Ecosystem Experiments-Tropics (NGEE-Tropics) and was funded by the Biological and Environmental Research (BER) Program within the U.S. Department of Energy’s (DOE) Office of Science under Contract No. DE-AC02-05CH11231. The Large-Scale Biosphere-Atmosphere Program (LBA), coordinated by the National Institute of Amazonian Research (INPA), provided data, logistical support, and infrastructure during field activities.