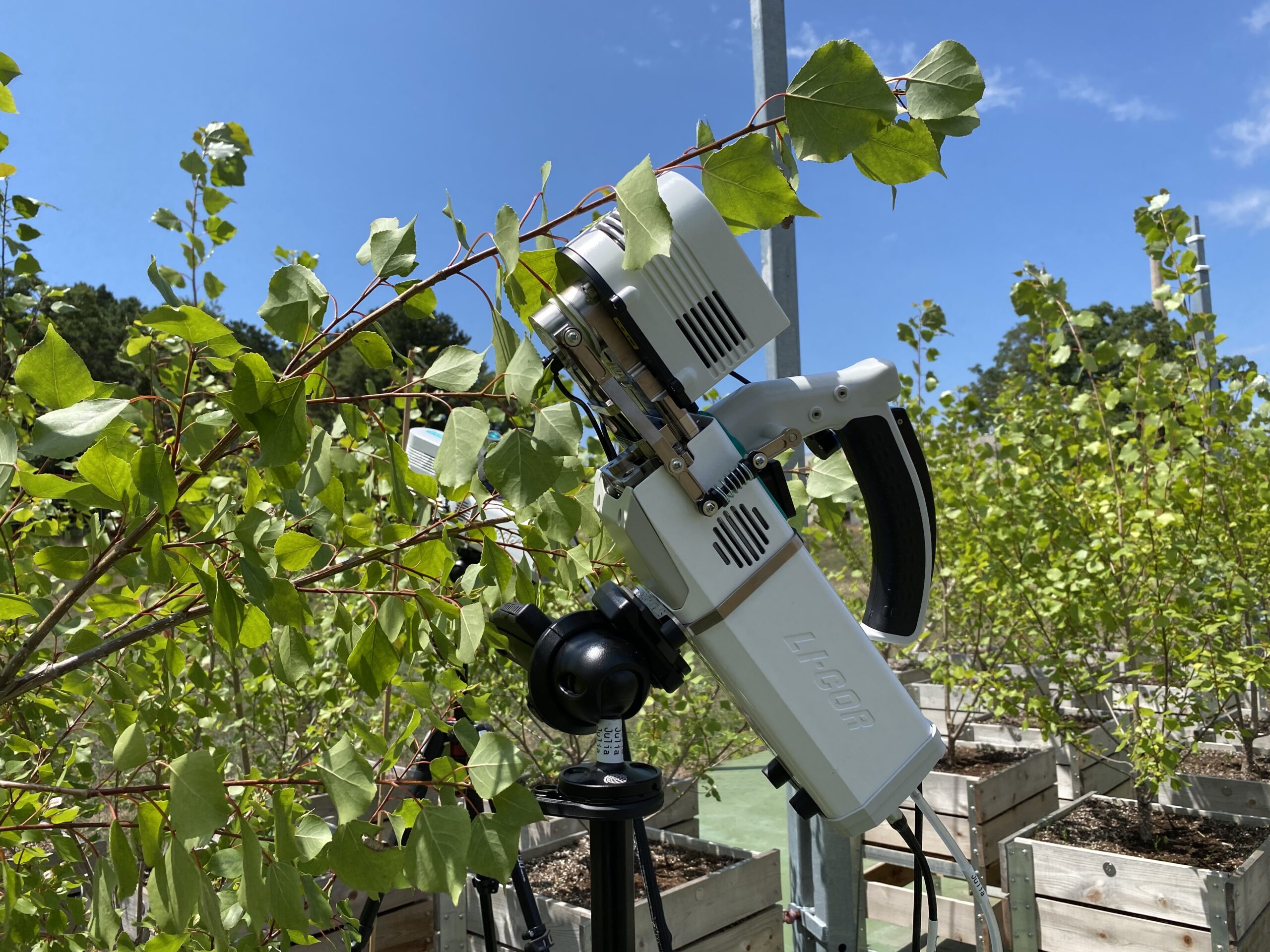 A LI-6800 portable photosynthesis system measures stomata response to light-level changes in poplar. Measured on intact branches and cut branch segments stored in water, these response curves enabled us to estimate key parameters that describe the water use efficiency of plants.

Many of the mathematical models scientists use to represent plant-environment interactions depend on the relationship between stomatal conductance (water loss) and photosynthesis (carbon gain) from leaves. However, the scientific community lacks a clear consensus on the best method for empirically measuring this relationship, known as stomatal slope. This research tested one aspect of measurement methodology: whether branch excision (i.e., branch removal from the tree) prior to measurement influences stomatal slope. Results showed that predawn branch excision did not significantly affect stomatal slope when measurements were made within 4 hours of excision. However, measurements made later in the day increased stomatal slope by an average of 55%. This research further demonstrated that when applied to plant function models, this stomatal slope change reduces modeled transpiration by 18% over a day.

Plant representation in mathematical models often involves assuming that observed processes for a single leaf on a branch removed from a plant apply broadly to the full intact plant. Likewise, model representation is also based on the assumption that the processes measured at one point in the day are constant over the entire day. This study showed that in cases where measurements are made early in the day, or a short time after branch removal, estimations of plant functioning are very similar for cut branches and intact branches. However, results also showed that estimated parameters may vary during the day, and that the longer a researcher waits after a branch has been removed, the larger the discrepancy between cut and intact branches. Thus, failure to consider these effects may confound comparisons of results and, in some cases, may lead to incorrect representation of critical photosynthesis and transpiration processes.

Many ecosystem models represent the link between water loss via stomatal conductance and carbon gain via photosynthesis with a linear function. In this framework the relationship between stomatal response and leaf level environmental conditions is linearly scaled by the stomatal slope parameter (g1), and bounded by a lower intercept parameter (g0). Researchers tested if estimates of the g1 and g0 parameters are impacted by a common aspect of measurement methodology by conducting paired stomatal response curves on intact and excised branches of a hybrid poplar clone.

The study demonstrated that predawn excision, combined with late day measurement, can strongly influence parameter estimates of g0 and g1. In the morning the team observed no significant difference in estimated g0 or g1. However, in afternoon measurements, cut branches produced g1 estimates which were 25% lower than an intact control. Over the diurnal course, g0 decreased by 55% and g1 increased by 56%, irrespective of treatment. These differences in parameter estimates have the potential to alter modeled daily transpiration rate by up to 18%. These findings suggest that late day measurement of excised branches has the potential to introduce considerable uncertainties into the modeling of plant carbon and water cycling.

This work was supported by the Next‐Generation Ecosystem Experiments (NGEE)–Tropics project, which is funded by the Biological and Environmental Research (BER) Program within the U.S. Department of Energy’s (DOE) Office of Science and through DOE contract No. DE‐ SC0012704 to Brookhaven National Laboratory.