Most uranium released 50 years ago into a stream has travelled 2 km and today remains immobilized and confined in a small wetland area. 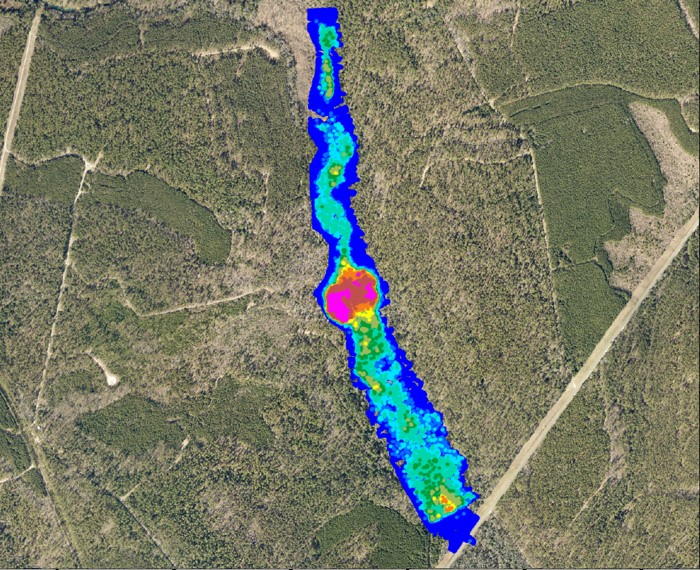 Map of uranium concentrations generated from more than 232,000 gamma spectra of a 28-hectare wetland located downstream of a uranium processing facility on the Savannah River Site in South Carolina.

Wetlands play important roles in the hydrologic cycle, including maintaining water quality by controlling nutrient availability and removing surface and groundwater contaminants. The objective of this study was to determine the mass of inorganic contamination remaining in a watershed 50 years after 43.5 metric tonnes of uranium were released into it upstream from a former DOE fuel fabrication facility on the Savannah River Site (SRS). High-resolution maps were generated of uranium concentrations in the watershed that were determined with portable gamma and X-ray detection equipment, revealing that 83% of all the released uranium remains immobilized in a relatively small 28-hectare wetland area within the SRS.

This is the first data-rich study to quantify the long-term effectiveness of a wetland to immobilize inorganic elements. The wetland concentrated the uranium three thousand times greater than typical background sediment uranium concentrations. Uranium distribution in this wetland system appeared to be largely controlled by local stream velocity and the movement of uranium in particulate form. Such information can now be used to model present and future wetland water quality resulting from contaminant and nutrient releases into the environment.

Wetlands possess a diverse set of biogeochemical properties that originate from their unique hydrological regime. These wet environments promote conditions that accumulate organic carbon and create steep biogeochemical redox, organic carbon, and microbial gradients that together can enhance binding of nutrients and groundwater contaminants within their sediments. The long-term attenuation of nutrients and contaminants by wetlands is susceptible to well- documented human-induced activities, as well as natural perturbations that can be chronic or episodic, such as droughts, floods, and fires. Significant environmental changes, such as those associated with hydrology, forest fires, or real-estate development, may alter the complex hydro-biogeochemical interactions within wetlands, causing the degradation of its water quality. Results from this work will advance models that consider the role wetlands play in controlling water quality and wetland responses to natural and human-induced disturbances.

Support for this research came from the Environmental Systems Sciences Program of the Office of Biological and Environmental Research, within the U.S. Department of Energy (DOE) Office of Science, under contract DE-AC02-06CH11357. Funding also came from the DOE’s Established Program to Stimulate Competitive Research (EPSCoR) in the Office of Basic Energy Sciences under Award Number DE-SC-00012530, supporting research at Clemson University and a collaboration with the Savannah River National Laboratory (SRNL). SRNL researchers received support through the DOE’s Office of Environmental Management contract with Savannah River Nuclear Solutions, LLC, number DE-AC09-08SR22470. Savannah River Ecology Laboratory researchers received support through the DOE Contract with The University of Georgia Research Foundation a Cooperative Agreement, number DEFC09-07-SR22506.