What a Low-to-No-Snow Future Could Mean for the Western U.S.

With mountain snowpacks shrinking globally, a new study analyzes when a low-to-no-snow future might arrive in the western U.S. and the implication 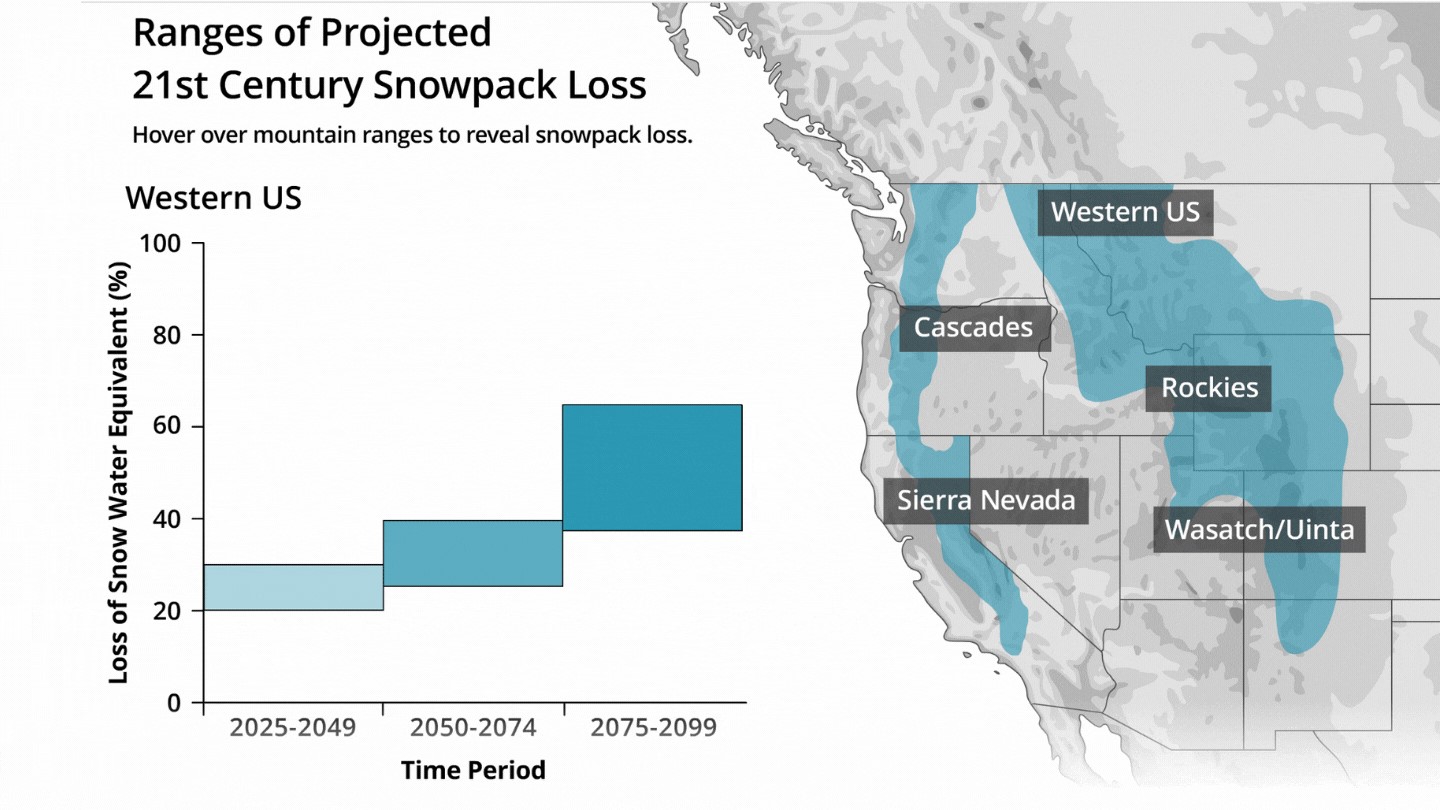 Chart shows projected snowpack loss for three time periods: near future, mid-century, and end-century. The projections are synthesized from 18 published climate studies, which predominantly provide projections from a higher-emissions scenario. The loss of snow water equivalent, or the total water content for a given depth of snowpack, is computed relative to a historical base period chosen by each individual study. Each bar denotes the interquartile range (25th-75th percentiles) of the projections.

Mountain snowpack acts as a large natural reservoir, providing water resources to communities, ecosystems, energy, and industry upon spring snowmelt. Because up to 75% of the western region’s water resources originate in mountainous watersheds, decreasing snowpack threatens resiliency of systems that depend on snowmelt water. This research synthesized historical observations of western U.S. snow loss over the 20th century and develops a range of projected snowpack conditions in the 21st century. This study highlights that western U.S. snowpack will likely decrease substantially over the next ~35-60 years, especially if high greenhouse gas emissions continue.

Comparable to recent western snowpack declines, future snow losses are projected to decrease 20-30% by the 2050s and 40-60% by the 2100s. But, using a portfolio of adaptation strategies could potentially build resilience to future low-to-no snow conditions. Models used to project future water cycle changes need to be improved to provide water resource managers with estimates that are better suited to decision making. The development of new atmosphere-through-bedrock modeling capabilities are needed and could greatly benefit from non-traditional scientific-stakeholder partnerships.

This study synthesized observational evidence of snow loss in the western U.S. over the 20th century and developed a range of projected snowpack conditions in the 21st century, elevating the understanding and importance of snow loss on water resources. Results show less consensus on the time horizon of future snow disappearance, but model projections suggest that if carbon emissions continue unabated, low-to-no snow conditions will become persistent in ~35–60 years, depending on the mountain range. Researchers propose a new low-to-no snow definition that uses a percentile approach, akin to the U.S. Drought Monitor, and considers sequencing of 1, 5, or 10 low-to-no snow years via a framework describing those losses as “extreme, episodic, or persistent.” Potential trickle-down impacts on mountain landscapes, hydrologic cycles, and subsequent water supply were also discussed. For example, diminished and more ephemeral snowpacks that melt earlier will alter groundwater and streamflow dynamics, but the directions of these changes are difficult to constrain given competing factors, such as higher evapotranspiration, altered vegetation composition, and changes in wildfire behavior in a warmer world.

A re-evaluation of long-standing hydroclimatic stationarity assumptions in western U.S. water management is urgently needed, given the impending impacts of snowpack loss. These hydroclimatic changes undermine conventional western U.S. water management practices. However, proactive implementation of soft and hard adaptation strategies could potentially build resilience to extreme, episodic, and, eventually, persistent low-to-no snow conditions. Finally, suggestions are provided for the scientific breakthroughs, management strategies, and institutional partnerships that will be needed to overcome a future with less or no snow. Co-production of knowledge between scientists and water managers can help to ensure that scientific advances provide actionable insight and support adaptive decision-making processes that unfold in the context of significant uncertainties about future conditions.

This research received support from: