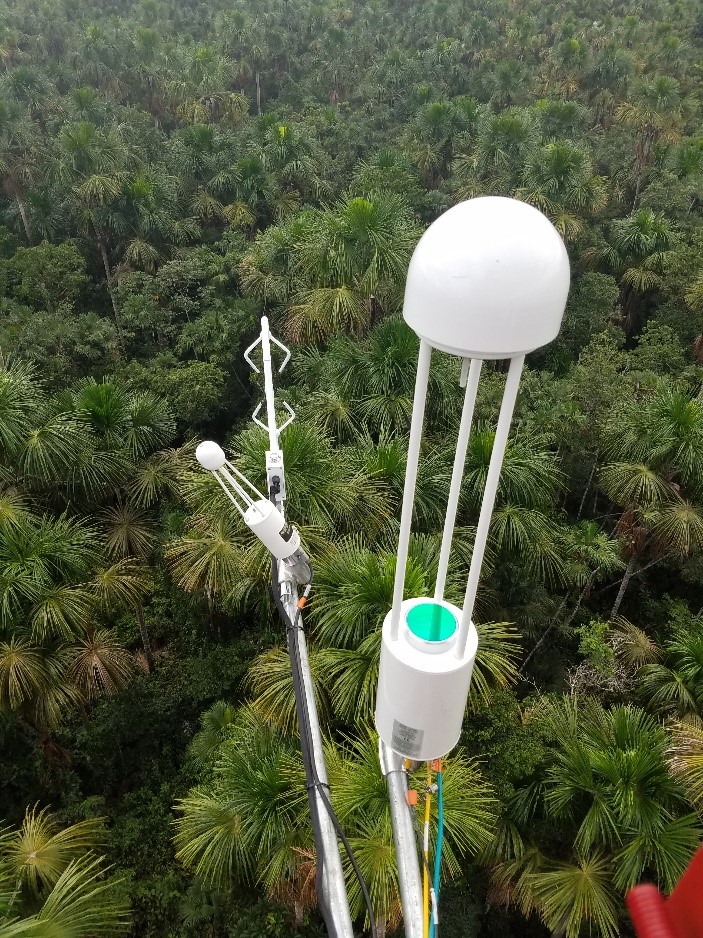 Tropical peatlands are a major, but understudied, biophysical feedback factor on the atmospheric greenhouse effect. To address this knowledge gap, the research team established an eddy covariance flux tower in a natural palm swamp peatland near Iquitos, Peru to improve the understanding of how these forested peatlands exchange carbon dioxide and methane with the atmosphere over a two-year period. The land-atmosphere carbon fluxes indicated that the peatland was a significant carbon dioxide sink but a methane source under current conditions, but evidence indicates that the sink strength is vulnerable to future climate change.

Recent modeling studies suggest that Amazonian peatlands play an important role in the global methane budget and are highly sensitive to climate change. Here, the team provide some of the first ecosystem scale observations to help provide a better biophysical understanding of the role that these Amazonian palm swamp peatlands play in carbon cycling. Study observations and analyses will be important for constraining models that aim to scale up the carbon budget for this region and will be critical for understanding how sensitive carbon dioxide (CO2) and methane CH4) emissions are to interannual variability in climate and hydrology.

This study reports ecosystem-scale CO2 and CH4 flux observations for an Amazonian palm swamp peatland over a two-year period in relation to hydrometeorological forcings. Seasonal and short-term variations in hydrometeorological forcing had a strong effect on CO2 and CH4 fluxes. High air temperature and vapor pressure deficit exerted an important limitation on photosynthesis during the dry season, while latent heat flux appeared to be insensitive to these climate drivers. Evidence from light-response analyses and flux partitioning support that photosynthetic activity was downregulated during dry conditions, while ecosystem respiration was either inhibited or enhanced depending on water table position. The cumulative net ecosystem carbon dioxide exchange indicated that the peatland was a significant carbon dioxide sink ranging from –465 (–279 to –651) g C m–2 y–1 in 2018 to  –462 (−277 to −647) g C m–2 y–1 in 2019. The forest was a methane source of 22 (20 to 24) g C m–2 y–1, similar in magnitude to other tropical peatlands and larger than boreal and arctic peatlands. Thus, this Amazonian palm swamp peatland appears to be a major carbon sink and to drive net negative radiative forcing under current hydrometeorological conditions, but evidence indicates that the sink strength is vulnerable to future climate change.

This research is based on work supported by: