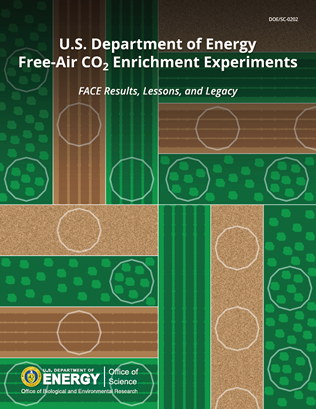 Growing concern in the 1970s about potential long-range consequences of carbon dioxide (CO2) emissions from the combustion of fossil fuels prompted the U.S. Department of Energy (DOE) to begin developing a CO2 research program. The goal was to obtain the scientific information needed to reduce uncertainty and develop a knowledgebase for decision-making. At its start in 1980, this program had three components: the global carbon cycle, climate effects, and vegetation effects. The vegetation effects component recognized that increased atmospheric CO2 could be a potential benefit to vegetation and crops because CO2 is an essential resource for plant growth. In addition to increasing crop yield, program developers and researchers recognized that this fertilizer effect could also result in greater storage of fossil fuel CO2 by forests.

Initial experiments were small in scale and scope and focused on the photosynthesis, physiology, and water use of crop plants, but the focus shifted toward responses of plants in natural systems, as needed for connections to the global carbon cycle. Program research investigated CO2 interactions with other environmental variables, emphasizing field research whenever possible and recognizing that exposure to elevated CO2 concentrations under realistic field conditions should lead to better predictions of plant response.

Whole-ecosystem field experiments were instituted in low-stature ecosystems, but experiments to address forest responses necessarily relied on tree seedlings or saplings in open-top chambers (OTCs) and not within intact forest ecosystems. The need for larger-scale, longer-duration experiments in each of the world’s six major biomes (tundra, boreal forest, temperate forest, tropical forest, grassland, and desert) became clear, and for these experiments, free-air CO2 exposure facilities were necessary.

The Free-Air CO2 Enrichment (FACE) technology was first developed by Brookhaven National Laboratory (BNL) for use in an agricultural setting. Elevated CO2 experiments, combined with manipulations of water and nitrogen supply, were conducted from 1989 to 1999 in Maricopa, Ariz., with cotton, wheat, and sorghum. Cotton was shown to be highly responsive to CO2 enrichment, but the C4 sorghum was not. Interactions with water and nitrogen varied across species.The BNL FACE system was scaled up for use with tall vegetation, and a prototype forest FACE system was tested in the Duke University Forest in 1994 and 1995, leading to a fully replicated FACE experiment in the loblolly pine forest in 1996. Other FACE experiments with forest stands and native vegetation began in 1997 at Oak Ridge National Laboratory (ORNL) in Tennessee (ORNL FACE in a sweetgum plantation), at the Nevada National Security Site (Nevada Desert FACE), and on U.S. Forest Service land in Wisconsin (Rhinelander FACE with trembling aspen mixed with sugar maple and paper birch). Over 10 to 12 years, these experiments exposed the vegetation in replicated, 25-m to 30-m diameter plots to ambient or elevated CO2 (about 550 to 565 parts per million). In the Rhinelander FACE experiment, the CO2 treatments were combined with ambient or elevated ozone, and the Duke FACE experiment added a nitrogen fertilization treatment toward the end.

This report summarizes the objectives and main results of DOE-sponsored experiments employing such facilities, along with the outcomes from research on ecosystem responses using field chambers. Additionally, this report highlights the many successes of DOE CO2 enrichment studies and considers the lessons learned that can be used to guide future initiatives.