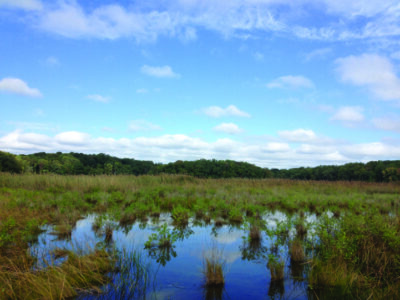 Coastal systems—found at the margins of both oceans and other large bodies of water such as the Great Lakes—are highly dynamic and are undergoing high rates of natural variability and change. Additionally, these systems are experiencing exceptional anthropogenic pressures that may lead to gradual or even sudden shifts and long-term changes in their behavior, responses, and evolution.

Existing observations and models of key processes and their feedbacks to the Earth system inadequately address key knowledge gaps in how coastal systems function. Advances in understanding how changing coastal systems function will require experiments, manipulations, cross-system observations, and multiscale, multiprocess modeling, all of which must be assimilated into scale-aware and variable-resolution Earth system models.

The U.S. Department of Energy’s (DOE) Office of Biological and Environmental Research (BER) has a long history of championing large-scale, long-term field and experimental studies and model development that capture natural and anthropogenic processes to tackle mission-relevant scientific challenges. Coastal systems present a unique opportunity for DOE to develop a broad range of interconnected infrastructure capabilities and tools to advance models, experiments, and observations across a hierarchy of scales, from the local to regional and global dimensions of the Earth system. Additionally, new variable-resolution capabilities in DOE’s Energy Exascale Earth System Model (E3SM) now enable resolution of the critical coastal land-water interface in the 8 to 12 km2 range, and resolutions are expected to significantly improve in the next few years. Coastal systems also cut across the scope of all five scientific grand challenge areas identified in the 2018 strategic plan for BER’s Earth and Environmental Systems Sciences Division (EESSD), of which the Environmental System Science program is a part.

Collectively, these considerations present a compelling opportunity for DOE in the field of coastal system science to advance the predictability of the Earth system.

For field observations and experiments, terrestrial-aquatic interfaces (TAIs) represent the major knowledge gap in understanding and scaling of coastal system processes. Recognition of the importance of TAIs to Earth system functioning was captured in the 2017 DOE workshop report titled Research Priorities to Incorporate Terrestrial-Aquatic Interfaces in Earth System Models. The report highlighted the unique biological, hydrological, and biogeochemical attributes of TAIs that can produce exceptionally high rates of biological productivity and biogeochemical cycling.

In 2019, DOE initiated the Integrated Coastal Modeling (ICoM) project to develop, evaluate, and apply a range of modeling tools to systematically analyze coastal processes, hazards, and responses across a range of spatiotemporal scales. ICoM’s focus is on the mid-Atlantic region, which exhibits a wide diversity of coastal development patterns and is home to dense networks of connected infrastructure that is often stressed or disrupted by hurricanes, extratropical storms, droughts, and other extreme events.

Also in 2019, DOE’s Open Watershed Science by Design workshop report highlighted the need for watershed system science that integrates across physical, chemical, and biological processes in the context of coordinated, open networks of research distributed across watersheds.

Shoreline of Lake Superior, one of the five Great Lakes of North America. [Courtesy K. Christen]

The project—Coastal Observations, Mechanisms, and Predictions Across Systems and Scales (COMPASS)—comprises two parts: a field study and a coastal modeling study. The first part focuses on field studies and associated process and ecosystem modeling of two coastal interfaces. One of these interfaces is an oceanic saline/brackish mid-Atlantic coastal environment, and the other is a Great Lakes freshwater coastal environment. The second study focuses on modeling (i.e., coupling of the atmosphere, land, lake, hydroclimate, biogeochemical systems, and multiple human sectors) and analysis of coastal systems in the Great Lakes region.

Under COMPASS, DOE defines the coastal TAI as the highly dynamic and high transitional gradient zone that includes the interface where the land surface meets waterbodies/oceans and extends into the immediate aquatic zone. The pilot project’s ultimate goal is to achieve a systems-level understanding of the hydro-biogeochemical functioning of coastal ecosystems through observational and field-based experimental research, which can then be captured in coupled process models and in a representative, scalable, flexible, and process-rich coastal ecosystem modeling framework.

Both COMPASS studies take advantage of DOE’s programmatic synergies, including the leveraging of existing infrastructure, data, model development, and other resources across DOE and other federal, international, state, local, and academic entities. Additionally, this pilot project collaborates with the larger coastal TAI community, providing access to project data, models, and research sites where appropriate.