Experimental warming of a tropical forest understory reduced root biomass and its response to hurricane disturbance. 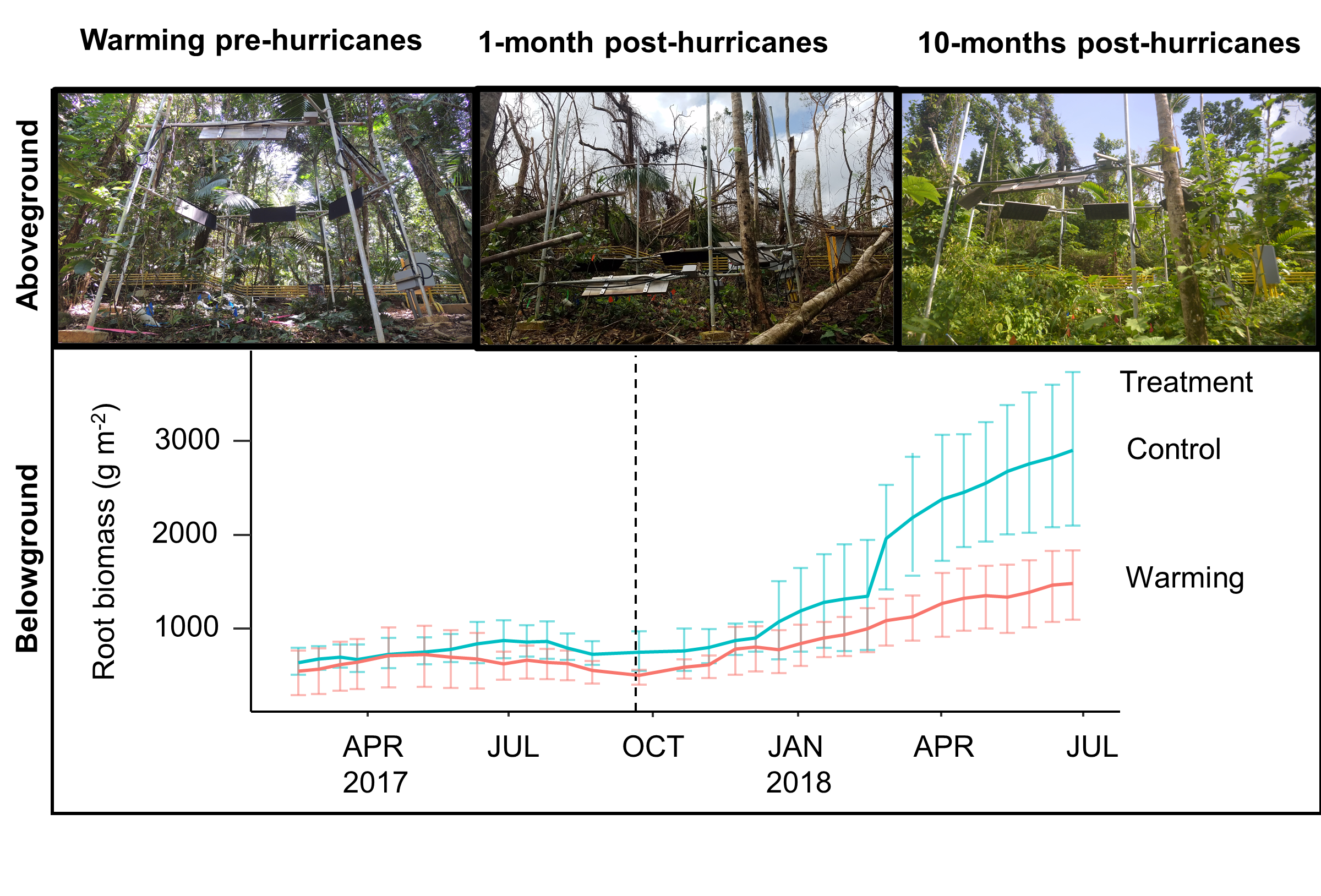 The forest warming plot before (top left) and 1 month (middle) and 10 months (right) after hurricanes passed over Puerto Rico. The bottom graph shows root biomass through time, before and after hurricanes (dotted line), in warmed (red) and control (blue) plots.

This study measured root responses to experimental soil warming and two hurricane disturbances in a tropical forest in Puerto Rico. Root images were used to measure root production, mortality, and biomass. Root production and biomass decreased with warming. Further, root recovery after the hurricanes was slower in warmed plots compared to controls.

Over the next 20 years, tropical forests are expected to be greatly affected by global warming, but how these forests and specifically their roots will respond remains unknown. This experiment has provided an unprecedented look at the complex interactive effects of disturbance and climate change on the root component of a tropical forested ecosystem. These findings suggest a decrease in root production in a warmer world and slower root recovery after a hurricane disturbance might have longer term consequences on these forests.

In hurricane-adapted forests of Puerto Rico, recovery from disturbance is critical to ecosystem function. However, human-caused temperature increases could alter recovery processes. The Tropical Responses to Altered Climate Experiment (TRACE) evaluated the response of forest root dynamics to experimental warming before and after being impacted by two consecutive hurricanes. Although warming was halted due to the hurricanes, root measurements continued, creating a unique opportunity to evaluate legacy effects of prior warming on forest recovery following hurricanes. Warming prior to the hurricane disturbance suppressed root production. After the hurricanes, root standing stocks increased overall due to a change in plant composition. This increase was less in previously warmed plots, suggesting that antecedent warming conditions suppressed roots’ capacity to recover following hurricane disturbance. These findings suggest tropical forest responses to disturbance may be dramatically changed as Earth warms.

The Tropical Responses to Altered Climate Experiment was supported by the Office of Biological and Environmental Research (BER) within the U.S. Department of Energy’s (DOE) Office of Science under Grant: DE-SC0011806, and the National Science Foundation under Grant: DEB 1754713.

This research was supported as part of the Next Generation Ecosystem Experiments–Tropics (NGEE–Tropics), which is funded by the Office of Biological and Environmental Research (BER) within the U.S. Department of Energy’s (DOE) Office of Science.