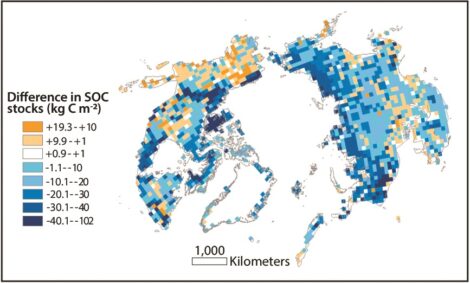 Predicting the impacts of climatic change and other environmental perturbations on Earth’s biogeochemical cycles is a major challenge. Soils, which hold two-thirds of the terrestrial carbon pool and more than twice as much carbon as the atmosphere, play a significant role in the global carbon cycle. Much of soil carbon exists as organic matter derived from decomposed plant and microbial debris accumulated over decades to thousands of years, but environmental changes can alter the rate at which soil carbon is cycled and returned to the atmosphere. Moreover, variations in vegetation, soil properties, and environmental conditions have created large regional and local differences in the size, distribution, and persistence of soil organic carbon (SOC) pools. These differences must be quantified and characterized to enable better predictions of how soils and their carbon pools will respond to environmental changes and influence subsequent carbon feedbacks between the land and the atmosphere.

To address these challenges, the Terrestrial Ecosystem Science (TES) program within the Department of Energy’s (DOE) Office of Biological and Environmental Research (BER) is supporting a Scientific Focus Area (SFA) to quantify and characterize the carbon stored in soils and evaluate its potential responses to environmental change. This SFA, led by Argonne National Laboratory, seeks to (1) improve fundamental understanding for regions that are critically sensitive to environmental forcing factors or for which modeling uncertainties are high, and (2) address region-specific factors and processes controlling soil carbon distributions, their potential responses to environmental forcing, and key knowledge gaps. 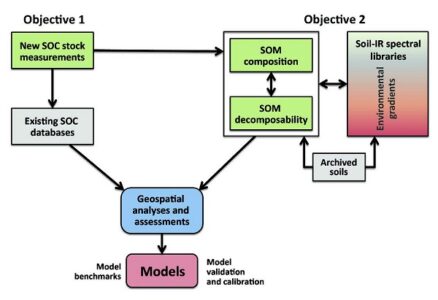 SFA Goal and Research Objectives The Soil Carbon Response to Environmental Change SFA seeks to quantify the carbon currently preserved in permafrost region soils, determine its spatial and vertical distributions, and assess how susceptible this carbon is to decomposition and release to the atmosphere. To accomplish this goal, two interrelated long-term objectives aim to

Answers to these questions will provide insights not only for small-scale processes but also for landscape-relevant water, carbon, and energy fluxes for similar peatlands. Results will inform higher-order models of vegetation responses under various levels of climatic warming and associated end-of-century atmospheric change.

Focus on the Permafrost Region 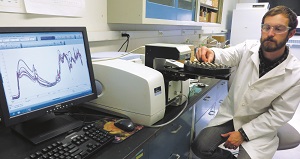 At present, SFA research is focused on soils in the northern circumpolar permafrost region, where huge organic carbon stocks are preserved mostly by the cold and often wet conditions. Recent estimates of the carbon stored in this region’s soils account for more than 25% of global soil carbon stocks in the surface meter and a third of the stocks down to a 3-m depth. Significant additional carbon stocks also exist below 3 m in the extensive and deep, ice-rich yedoma deposits that developed in unglaciated areas during the late Pleistocene. Climatic change is already causing widespread permafrost thawing, hydrologic changes, and related disturbances that will likely increase the decomposition rate of the region’s soil carbon stocks. Return of this carbon to the atmosphere as greenhouse gases (e.g., carbon dioxide and methane) could feed back to accelerate the rate of global warming. However, current observation-based and model estimates of permafrost region SOC stocks are both highly uncertain and not in agreement. Even less is known about the potential vulnerability of these carbon stocks to changing environmental conditions.

Accomplishing the SFA research objectives relies on (1) collection of new observations through field campaigns, (2) laboratory characterization of soil organic matter (SOM) composition and potential decomposability, (3) development of mid-infrared (MIR) spectroscopy as a tool for generating estimates of SOM composition and decomposability across the permafrost region, and (4) geospatial analysis and modeling to create maps of soil carbon distributions and their decomposability to benchmark and constrain models.

Reducing Uncertainties for Heterogeneous Landscapes: New measurements address uncertainties associated with the mixing and heterogeneity caused by cryoturbation and other freeze-thaw processes in permafrost soils. Research specifically targets how soil carbon distributions are influenced by topographic position within hillslope landscapes and by the development of ice-wedge polygons on lowland coastal plains.

Evaluating Organic Matter Composition and Decomposability: Research investigates whether SOM composition can predict the potential decomposability of carbon pools currently preserved in permafrost region soils. Physical and chemical fractionation and spectroscopic approaches to characterize SOM composition are being linked to assessments of potential decomposability (and estimates of soil carbon pool sizes and their turnover times) derived from standardized laboratory incubation bioassays for soils representing different ecoregions and soil types. Multivariate calibration models are being developed to predict these measurements from MIR spectra generated for study soils. 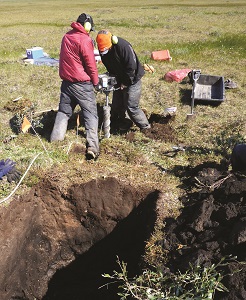 New Measurements of Soil Organic Carbon. To account for the heterogeneity of soil carbon distributions caused by cryogenic processes, soil pits are excavated to obtain a clear view of the organization and mixing of soil horizons (layers) with varying organic matter contents. With this knowledge, a series of soil cores are then used to characterize larger scale variations associated with landscape features, such as ice-wedge polygons.

Leveraging Archived Soil Resources: Region-wide assessments require large numbers of observations. Soil samples collected by SFA collaborators from across the northern circumpolar region, together with samples obtained during SFA field campaigns, are being scanned to create a MIR spectral library for permafrost region soils. Application of the MIR calibration models developed in tandem with SFA soil fractionations and incubation bioassays to the spectral library is expected to enable efficient, cost-effective, and widespread estimates of SOM composition and decomposability for the permafrost region.

Improving Regional Estimates: Geospatial analysis and modeling, coupled with an understanding of the drivers of soil formation and the addition of new SFA measurements to existing databases, are being used to develop high-resolution maps of the spatial and vertical distributions of permafrost region soil carbon stocks and, ultimately, SOM composition and potential decomposability.

SFA geospatial products can be used as benchmarks to validate and constrain regional- and global-scale model estimates of existing soil carbon stocks and model simulation outputs. In addition, the knowledge gained from SFA research can be used to constrain model parameters by identifying key environmental drivers controlling the distributions of soil carbon stocks and variations in SOM composition, potential decomposability, and turnover times.