Measuring ecosystem carbon, water, and energy fluxes across the Americas 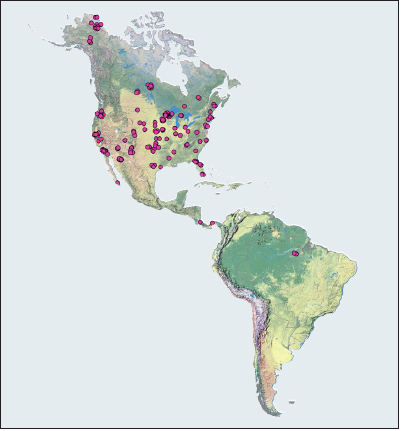 Map of AmeriFlux Locations. AmeriFlux sites throughout the Western Hemisphere.

The largest flows of carbon between land and atmosphere come from terrestrial ecosystem photosynthesis and respiration. These flows have profound impacts on atmospheric composition and climate. Through the AmeriFlux Network—a collection of long-term, eddy flux measurement stations located across the Western Hemisphere—carbon, water, and energy flux measurements and site metadata are gathered, processed, and shared with the scientific community. 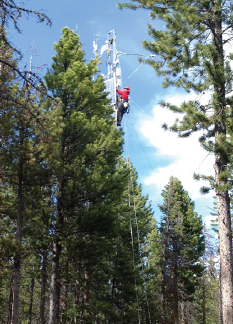 Chimney Park. The Chimney Park flux tower is in a subalpine conifer forest in Wyoming’s high mountains. An AmeriFlux Management Project member climbs the tower during the 2014 QA/QC site visit.

The AmeriFlux Network is a grassroots, investigator-driven group of scientists. Measurement sites span the full spectrum of ecosystems and climates across the Americas, from the Amazonian rainforests to the North Slope of Alaska. Some sites are strategically clustered to focus on ecosystem response to climate change over gradients of elevation and rainfall; others observe how land-use and agricultural practices affect carbon, water, and energy fluxes.

The Department of Energy supports the AmeriFlux Network through the AmeriFlux Management Project (AMP) at Lawrence Berkeley National Laboratory. AMP works with AmeriFlux scientists and sites to ensure the quality and availability of the continuous, long-term ecosystem measurements necessary to understand these systems and build effective models and multisite syntheses. 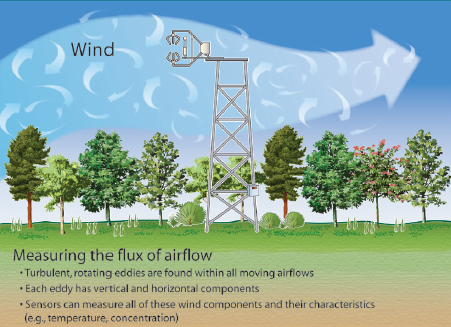 Eddy Covariance Method to Measure Flux. The eddy covariance method derives fluxes of carbon, water, and energy between the vegetation and soil and the atmosphere. This method measures the velocity of air drafts as they move up and down, and the instantaneous concentration of trace gases in those drafts. At AmeriFlux sites, these fluxes are measured directly, continuously, and over large areas, without disrupting the systems being studied. With advances in computational capability and instruments that measure wind turbulence and fluctuations of trace gases quickly and reliably, use of the eddy covariance method has expanded worldwide.