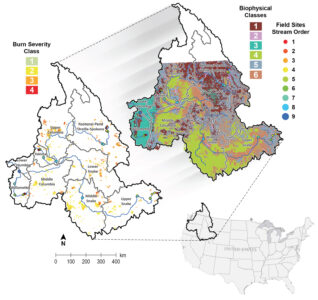 Columbia River Basin (CRB). The Columbia River drains 668,000 km2 (258,000 ml2) of the western United States and Canada, including seven states and a portion of British Columbia. Many watersheds within the CRB are highly susceptible to disturbance by wildfires. Left map shows recent burns coded by burn severity. These watersheds also have a wide range of diverse characteristics including topography, climate, vegetation, land use, and geology. Right map shows six watershed biophysical classes, defined through machine-learning analysis of remote sensing and other data available within the U.S. portion, showing their distribution across the CRB. .

Exchange of water between rivers and the surrounding subsurface environment is a vital aspect of watershed function. These hydrologic exchange flows (HEFs) stimulate biogeochemical activity in the subsurface adjacent to the river channel through provision of nutrients, mixing of dissolved reactants, and exposure to microbes. They also modulate water temperatures and thus play a key role in water quality, nutrient dynamics, and energy and material fluxes.

There is strong evidence that river corridor hydrobiogeochemical processes are highly variable among different stream orders and climatic, ecological, and geographical settings; these processes are also hypothesized to be highly sensitive to various environmental and anthropogenic disturbances including floods, drought, wildfire, land-use changes, and water use and management. A science focus area (SFA) program led by Pacific Northwest National Laboratory (PNNL) aims to predict river corridor and watershed system responses to disturbances at scales relevant to national water challenges. The SFA is supported by the Department of Energy’s (DOE) Office of Biological and Environmental Research (BER) as part of BER’s Subsurface Biogeochemical Research (SBR) program.

The SFA is performing studies over various settings and scales within the Columbia River Basin (CRB) in the Pacific Northwest and in other major river basins around the contiguous United States, the latter through collaborations with other SBR SFAs. Research activities within the SFA focus on understanding processes in the river corridor—which includes the surface water channel and other functionally connected features such as the hyporheic zone, near-shore groundwater aquifer, and riparian zone—and quantifying their cumulative effects at watershed and basin scales.

PNNL SBR SFA researchers are developing mechanistic understanding of coupled hydrologic and biogeochemical processes across a wide range of river corridor and watershed settings and translating that understanding into multiscale numerical models. Key questions include: 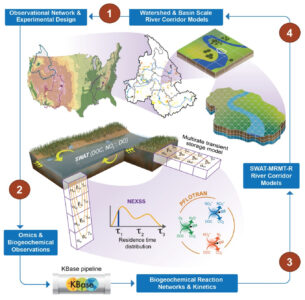 Multiscale ModEx. Integration of models and experiments (ModEx) across scales from biogeochemical reactions occurring in a water sample to watersheds and basins is the foundational element of the SFA research approach. Existing watershed- and basin-scale models (1) are used to formulate scientific hypotheses and guide the design of observational networks and laboratory experiments. The resulting omics and biogeochemical observations (2) are analyzed using DOE’s Systems Biology Knowledgebase (KBase) and other tools to generate new biogeochemical reaction networks and kinetics (3). These are translated into reaction models and parameters for use in river corridor models (4). The cycle is completed by connecting river corridor models with other watershed component models to generate improved watershed- and basin-scale model (1) predictions that incorporate best process understanding and data.

Watershed function can be disturbed by various changes in conditions, including long-term transitions such as land-use changes or climatic variations as well as episodic events such as wildfires, floods, droughts, or pest infestations. In the CRB, wildfires are becoming increasingly prevalent and intense. For example, the 2014 Carlton Complex fire burned over 250,000 acres causing nearly $100 million in damages and became the largest single wildfire in Washington state history. In general, widespread increases in fire activity in the western United States over the past 50 years have been well documented. Wildfires significantly alter the character of organic matter and amounts of nutrients delivered to river corridors; they also affect hydrologic responses to precipitation events leading to increased runoff and greater flood risk. The SFA is evaluating the impacts of these disturbances on river corridor hydrobiogeochemistry and their cumulative effects on watershed function and dynamics at basin scales.

Fully understanding the functioning and dynamics of large and complex watersheds like the Columbia River Basin is intractable for individual researchers or even a single research team. Through intentional application of open science principles [e.g., findable, accessible, interoperable, and reusable (FAIR) data and integrated, coordinated, open, and networked (ICON) science], the SFA is enabling and partnering with a community of researchers that can more effectively solve large scientific challenges. For example, the Worldwide Hydrobiogeochemical Observation Network for Dynamic River Systems (WHONDRS) is stewarded and coordinated by SFA scientists. WHONDRS is a global consortium of researchers that aims to understand how high-frequency river stage variations influence river corridor function across a wide range of geographical settings. The consortium is developing new instrumentation and protocols for sample collection that will extend new process understanding to river corridor and watershed systems worldwide. WHONDRS and similar collaborations are enabling the scientific community to do together what would be impossible to accomplish alone.

As of May 2020, nine community datasets have been openly published in DOE’s Environmental Systems Science Data Infrastructure for a Virtual Ecosystem (ESS-DIVE) data repository.

Overview of the aims and goals of the WHONDRS research consortium. (2019)

New sensor technology for estimating the mass flux of water through subsurface sediments in dynamic systems. (2018)

Ecologist James Stegen discuss hyporheic zone research in the area where river water and groundwater mix along the Columbia River. (2016)