A hybrid data–model approach improves the accuracy of mapping soil thickness as well as soil transport rate and soil production rate in a high resolution. 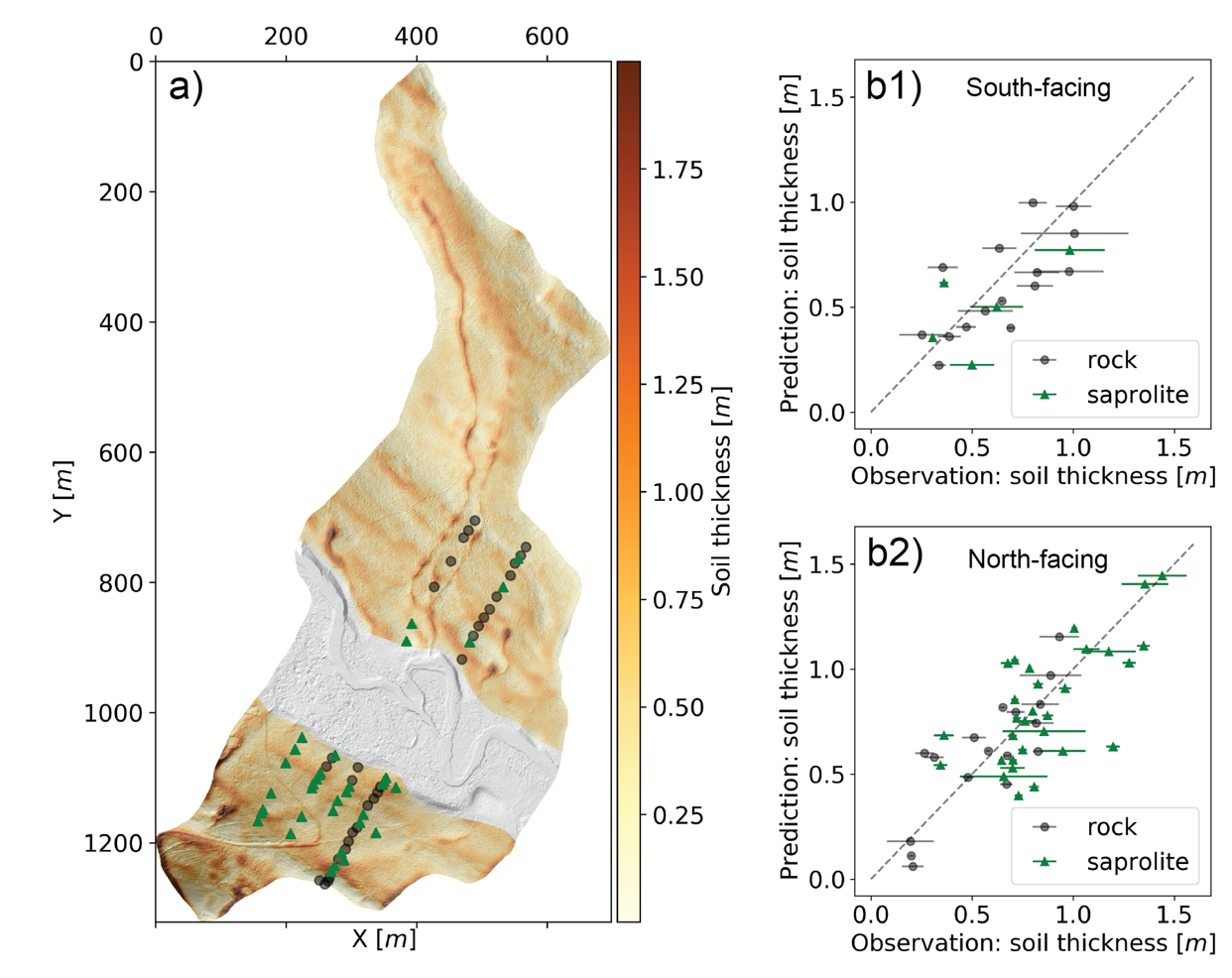 Map of soil thickness from modeling (a). Comparison between model and field measurements for south-facing and north-facing hillslope (b1 and b2). Error bars along x-axis are the differences between auger and CPT data.

Soil thickness plays a central role in the interactions between vegetation, soils, and topography, where it controls the retention and release of water, carbon, nitrogen, and metals. However, mapping soil thickness—here defined as the mobile regolith layer—at high spatial resolution remains challenging. An accurate soil thickness map can improve the estimation of water, carbon, nitrogen, and other element dynamics for hydrologic and biogeochemical modeling, but, because of the complexity of factors that affect soil thickness, it remains a key uncertainty.

A new hybrid model combines a process-based model with empirical relationships to reveal the fundamental mechanisms of soil thickness and understand spatial variability. This hybrid model generalizes the mechanisms and is therefore applicable to various sites. The soil thickness map can be an essential input for Earth System models, particularly for land surface models.

Researchers developed a hybrid model that combines a process-based model and empirical relationships to estimate the spatial heterogeneity of soil thickness with fine spatial resolution (0.5 m). This model was applied to two aspects of hillslopes (southwest- and northeast-facing, respectively) in the East River Watershed in Colorado. Two independent measurement methods—auger and cone penetrometer—were used to sample soil thickness at 78 locations to calibrate the local value of unconstrained parameters within the hybrid model.

With seven parameters in total for calibration, this hybrid model can provide a realistic soil thickness map with a relatively small amount of sampling dataset comparing to machine learning approach. Integrating process-based modeling and statistical analysis not only provides a thorough understanding of the fundamental mechanisms for soil thickness prediction, but also integrates the strengths of both statistical approaches and process-based modeling approaches.

The Watershed Function Scientific Focus Area (award no. DE-AC02- 05CH11231) is funded by the Biological and Environmental Research (BER) Program within the U.S. Department of Energy’s (DOE) Office of Science.