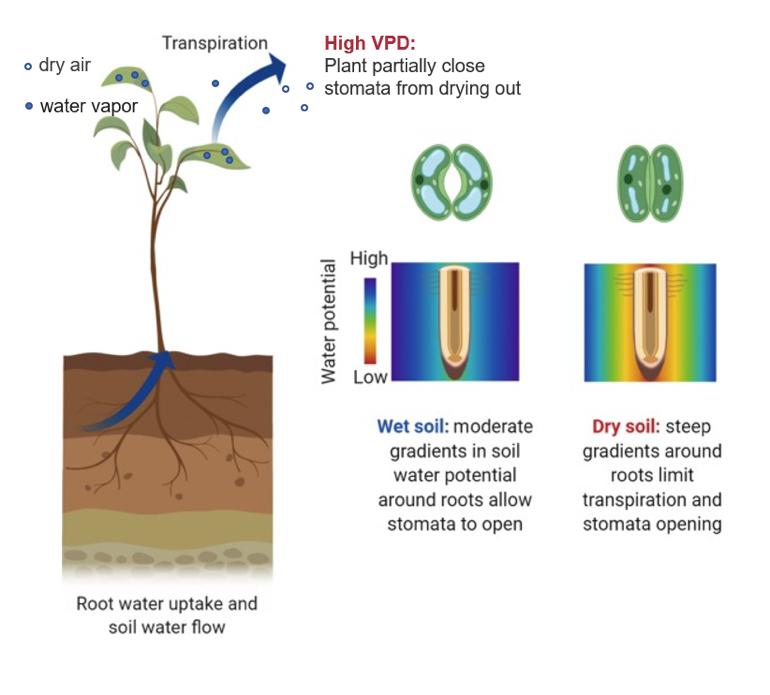 Soil drying and VPD constraints on stomatal conductance and transpiration.

Water stress from dry soil or dry air  can trigger plant drought responses to limit water loss through transpiration. However, separating the cause of the response between these two interactive, co-occurring stresses is challenging. To disentangle these stresses, this study used statistical models based on field observations and results from a land surface model with an added capability to simulate water movement in the soil and water transport within the plant at a tropical forest site in Panama. Researchers found that dry soil is more influential than dry air in limiting plant water loss at the site during an El Niño drought.

Carbon sequestered by tropical forests during normal and wet years can be released during drought years due to tree mortality and reduced ecosystem productivity. Recent drought-related plant mortality has been attributed to drier air from increasing vapor pressure deficit (VPD) associated with climate change. This research disentangled the relative impact of VPD and soil water stress on canopy water conductance that controls plant transpiration at a tropical forest site in Panama, highlighting the need for new data collection and improved model representation of drought response mechanisms to improve predictive understanding of tropical forest responses to drought.

In this research, field data and numerical modeling were used to isolate the impact of dry soil and VPD on evapotranspiration (ET) and gross primary productivity (GPP) at a tropical forest site in Barro Colorado Island (BCI), Panama, focusing on their response to the drought induced by the El Niño event of 2015-2016. Numerical simulations were performed using a plant hydrodynamic scheme (HYDRO) and a heuristic approach that ignores stomatal sensitivity to leaf water potential in DOE’s Energy Exascale Earth System Model (E3SM) Land Model (ELM). The sensitivity of canopy conductance to VPD obtained from eddy-covariance fluxes and measured sap flux shows that, at both ecosystem and plant scale, soil water stress is more important in limiting canopy conductance than VPD at BCI during the El Niño event. The model simulations confirmed the importance of water stress limitation on canopy conductance, but overestimated the VPD impact compared to that estimated from the observations. During the dry season at BCI, seasonal ET, especially soil evaporation at VPD > 0.42 kPa simulated using HYDRO and ELM, was too strong and will require alternative parameterizations.

This research was supported by the Next Generation Ecosystem Experiment-Tropics (NGEE-Tropics) project, which is part of the Environmental System Science (formerly Terrestrial Ecosystem Science) program in the Office of Biological and Environmental Research (BER) within the U.S. Department of Energy’s (DOE) Office of Science.