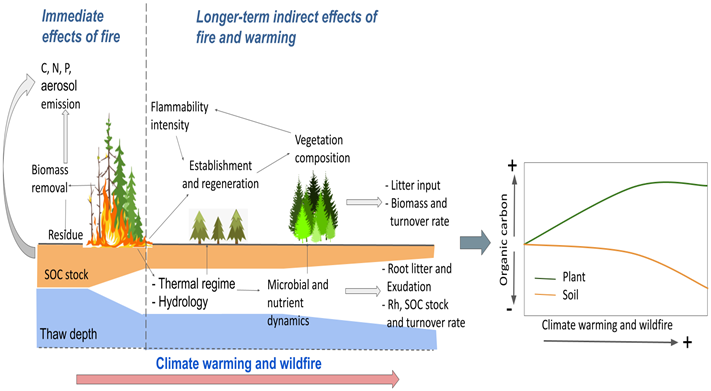 In this study, researchers evaluated and applied a mechanistic ecosystem model, Ecosys, to disentangle the direct and indirect effects of wildfire on ecosystem and soil organic carbon (SOC) stocks across the tundra and boreal ecosystems of Alaska. The researchers hypothesized that climate warming and increasing atmospheric carbon dioxide (CO2) will enhance plant carbon (C) uptake, plant biomass, and thereby litter C inputs to the soil. However, they found that, in the long term, accelerated SOC decomposition and combustion losses from wildfire will result in net SOC losses.

Currently, there are large differences between observationally derived and numerical model estimates of future high-latitude C stocks. While it is clear that climate warming and wildfire can cause rapid soil C losses, it is unclear how increases in vegetation growth may offset these losses and over what time frame that may happen. Researchers found that wildfire will increase net C losses to the atmosphere and thus feedbacks to climate warming, but this transition will take around two centuries. Therefore, on this time scale, wildfire C losses from combustion may reverse the historical C sink of northern ecosystems.

Arctic and boreal permafrost SOC decomposition has been slower than C inputs from plant growth since the last glaciation. Recent climate warming has increased SOC decomposition and altered wildfire regimes in a trend that is expected to continue. Researchers first demonstrated that their model accurately represented observed plant biomass and C emissions from wildfires in Alaskan ecosystems. They then found that future warming and increased atmospheric CO2 will result in plant biomass gains and higher litterfall. However, increased C losses from (a) wildfire and (b) rapid SOC decomposition driven by the increased plant C inputs to the soil and deepening active layer will lead to about 4.4 PgC of SOC losses, mostly in the top 1 m of soil. These SOC losses offset plant C gains by about 2200, resulting in the ecosystem becoming a net C source to the atmosphere. Simulations excluding wildfire increases yielded about a factor of four lower SOC losses by 2300. These results show that projected wildfire and warming will accelerate high-latitude soil C losses, resulting in a positive feedback to climate change.

This research was supported by the Biological and Environmental Research (BER) Program within the U.S. Department of Energy’s Office of Science under Contract No. DE-AC02-05CH11231 as part of the Next-Generation Ecosystem Experiments-Arctic (NGEE-Arctic) project and the Reducing Uncertainties in Biogeochemical Interactions Through Synthesis and Computation (RUBISCO) Science Focus Area. Funding was also provided by NASA’s Arctic-Boreal Vulnerability Experiment (ABoVE) and Carbon Cycle Science programs (NNX17AE13G).