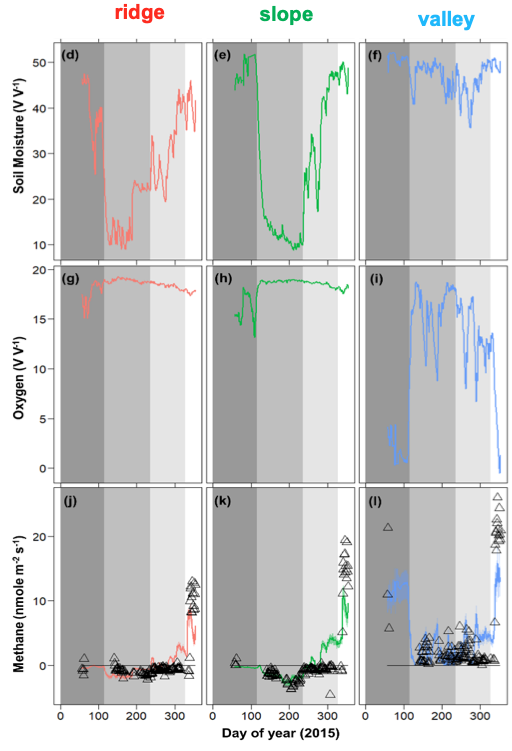 Hot spot and hot moment dynamics can contribute to methane emission from tropical forest soils. For example, climate shifts between drought and recovery can result in pulses of released methane, while landscape position controls the proportions of methane production versus consumption. The research team used model simulation to understand how different kinds of microbes and observed soil moisture and oxygen dynamics contribute to production and consumption of methane along a wet tropical hillslope during typical and drought conditions. Drought alters the diffusion of oxygen and microbial substrates into and out of soil microsites, resulting in enhanced methane release from the entire hillslope, but only during drought recovery.

Hot spots and hot moments of methane emissions were attributed to a specific combination of landscape position and soil moisture status, which subsequently affected the activity of different soil microbes and net methane emissions.

Methane emissions and other soil variables were vastly different along a valley to ridge catena, and during drought and typical conditions. In particular, valley soils nearly always emitted methane, in contrast to ridge and slope soils. However, during recovery from a strong drought, methane emissions were substantial from all three landscape positions. This study wanted to understand the reasons behind the complex methane dynamics, both in terms of space (hot spots) and in time (hot moments). A microbial functional group model that considered aceticlastic and hydrogenotrophic methanogenesis, acetogenesis, and methanotrophy was coupled with capabilities to consider diffusion of solutes and gases into and out of soil microsites. The model successfully represented methane emissions under all conditions and from all landscape positions. Methanogens were dominant in the wet valley soils, while methanotrophs were dominant in the drier ridge and slope soils. When the soils undergo wetting following the drought, diffusion of oxygen becomes limiting in the ridge and slope soils, together enhancing aceticlastic methanogenesis and decreasing methanotrophy, resulting in strong methane releases from all topographic positions.

This work was supported through an Early Career Award through the Office of Biological and Environmental Research (BER), within the U.S. Department of Energy (DOE) Office of Science, and by grants from DOE and the National Science Foundation (NSF), as well as the NSF Luquillo Critical Zone Observatory to University of New Hampshire (UNH) and the NSF Luquillo Long-Term Ecological Research Program to University of Puerto Rico (UPR). Additional support was received from the U.S. Department of Agriculture (USDA) National Institute of Food and Agriculture’s, McIntire Stennis project. This research used resources of the Compute and Data Environment for Science (CADES) at Oak Ridge National Laboratory, which is managed by UT-Battelle, LLC, for DOE.