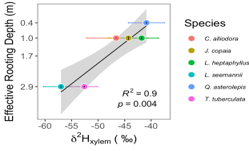 In a rainforest of Barro Colorado Island, Panama, scientists from Los Alamos National Laboratory and other institutions as part of the Next Generation Ecosystem Experiment (NGEE)-Tropics developed and tested the first inverse model of trees’ rooting depths that is integrated with plant physiology. Deep-rooted tree species had water transport systems that were likely to fail when water stressed. However, across a variety of drought conditions, deep-rooted species were less dehydrated and survived better than shallow-rooted tree species, especially among evergreen trees. This emphasizes the need to incorporate drought exposure risk in evaluating tree drought resilience.

Rooting depths are a critical unknown for modeling forest response to droughts, which are projected to intensify. Due to challenges in measuring rooting or water-sourcing depths, researchers have relied on above-ground traits to assess the likelihood of drought-induced tree mortality. The models developed through this research will allow wider integration of rooting depths and drought exposure in drought resilience studies.

Deep-water access is arguably the most effective, but under-studied, mechanism that trees employ to survive during drought. Functional traits such as the degree of vulnerability of trees’ water-conduits to blockage due to air-entry (embolism) can predict mortality risk at given levels of dehydration, but deep-water access may delay tree dehydration. Here, scientists tested the role of deep-water access in enabling survival within a diverse tropical forest community in Panama using a novel data-model approach.

The role of deep-water access in mitigating mortality of hydraulically-vulnerable trees has important implications for our predictive understanding of forest dynamics under current and future climates.

This research was supported as part of the Next Generation Ecosystem Experiments-Tropics (NGEE-Tropics), funded by the Office of Biological and Environmental Research in the U.S. Department of Energy’s (DOE) Office of Science. Funding from the following sources also supported this research: the U.S. National Science Foundation, the U.S. Department of Agriculture, and the Institute of Research for Development (IRD) France.