In model simulations, degraded tropical forests suffered more from droughts than intact forests except under the most extreme conditions. 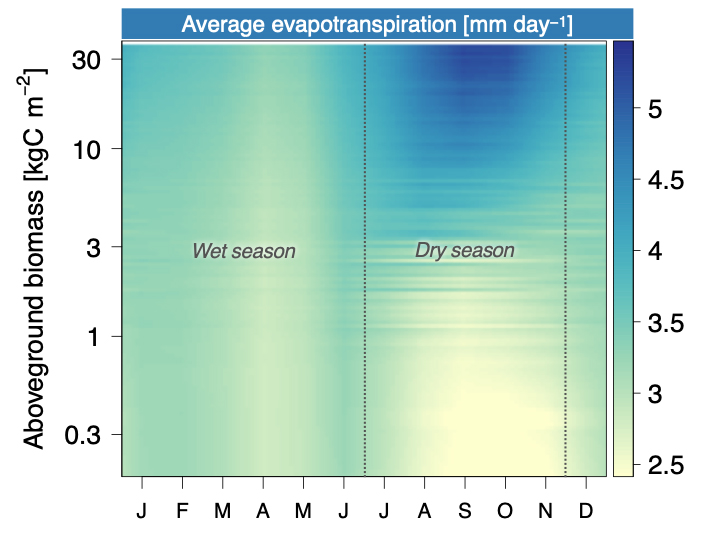 Normally moist tropical forests suffer from the effects of droughts. In a model study researchers found that degraded forests (forests that had serious impacts from logging and or burning) absorbed less carbon dioxide from the atmosphere, evaporated less water and got hotter relative to intact forests under mild to moderate drought conditions. Under severe drought conditions, all forests had similar responses in terms of water loss and warming.

Tropical forests contribute substantial amounts of water vapor to the atmosphere that falls as rain downwind. Today more tropical forests are degraded than intact and this may be changing the amount of atmospheric water vapor. Future exploration of these results may help to explain why tropical forest regions are suffering longer and more severe droughts.

Researchers from NGEE-Tropics integrated small-footprint airborne lidar data with forest inventory plots across precipitation and degradation gradients in the Amazon. They provided the forest structural information to the Ecosystem Demography Model (ED-2.2) to investigate how degradation-driven forest structure affects sensible heat, evapotranspiration and gross primary productivity. Tropical forest degradation effects were the strongest in seasonal forests. Increased water stress in degraded forests resulted in up to 35% reduction in evapotranspiration and gross primary productivity, and up to 43% increase in sensible heat flux. Relative to intact forests, degradation effects diminished during extreme droughts, when water stress dominated the response in all forests. These results indicate a much broader influence of land cover and land use change in energy, water, and carbon cycles that is not limited to deforested areas and highlight the relevance models that consider of forest structure such as FATES in predicting biophysical and biogeochemical cycles.

This research was funded NASA (16-IDS16-0049), the NASA Postdoctoral Program, administered by Universities Space Research Association under contract with NASA and the U.S. Department of Energy, Office of Science, Office of Biological and Environmental Research as part of the Next-Generation Ecosystem Experiments–Tropics.