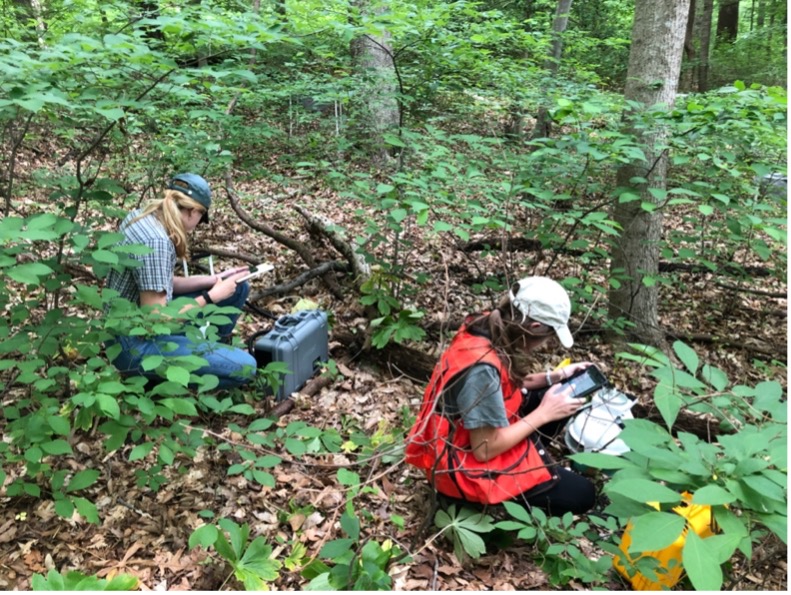 Coastal forests are increasingly exposed to climate change and sea level rise, but the impacts to soil stability are poorly understood. This experiment examined how soil might change when transplanted between parts of a tidal creek that differed in salinity. Scientists found that soils with a history of salinity and inundation exposure were more resistant to changing hydrology, suggesting that the soils already learned how to adapt to environmental changes. Differences in the resilience of soil carbon cycling will likely vary across landscapes, explained by soils’ ecology, biogeochemistry, and legacy of prior exposure to disturbance.

Researchers used a natural salinity gradient in an eastern Maryland tidal creek to examine how soil respiration and chemistry may change under novel salinity and inundation disturbance regimes. Soil monoliths were transplanted among plots varying in seawater exposure and elevation above the creek and were monitored for two years. The response of soil respiration—the flow of carbon dioxide from the soil to the atmosphere—was dependent upon the salinity and inundation legacies associated with each study location. Respiration did not change (i.e., high resistance) under new moisture conditions in lowland soils with a history of seawater exposure. Conversely, respiration decreased (i.e., low resistance) in upland soils that had little past exposure to seawater or inundation decreased (i.e., low resistance) and remained suppressed (i.e., low resilience) when those soils were exposed to wetter, saline conditions.

Additionally, transplantation resulted in greater changes to upland soil chemistry relative to that observed in lowland soils. Together, these results suggest that disturbance legacies shape coastal forest soil responses to changing salinity and inundation disturbance regimes. However, fully understanding the dependence of system responses on disturbance legacies requires future study across a variety of systems and spatial and temporal scales.

The transplant experiment was established during the PREMIS Initiative, a Laboratory Directed Research and Development program at Pacific Northwest National Laboratory (PNNL). Additional analyses for this paper were supported through the Coastal Observations, Mechanisms, and Predictions Across Systems and Scales (COMPASS)-Field, Measurements, and Experiments (FME) Project. PNNL is a multi-program national laboratory operated by Battelle for the Department of Energy under Contract DE-AC05-76RL01830. COMPASS-FME is a multi-institutional project supported by the Biological and Environmental Research (BER) Program’s Environmental System Science program, within the Department of Energy’s (DOE) Office of Science. This research was also supported by the Smithsonian Environmental Research Center.