How Accurate are Predictions of Amazon Forest Water and Light Use Throughout the Year?

Comparisons of observations and model predictions point to gaps in the representation of tropical forest carbon, water, and energy fluxes in Earth system models. 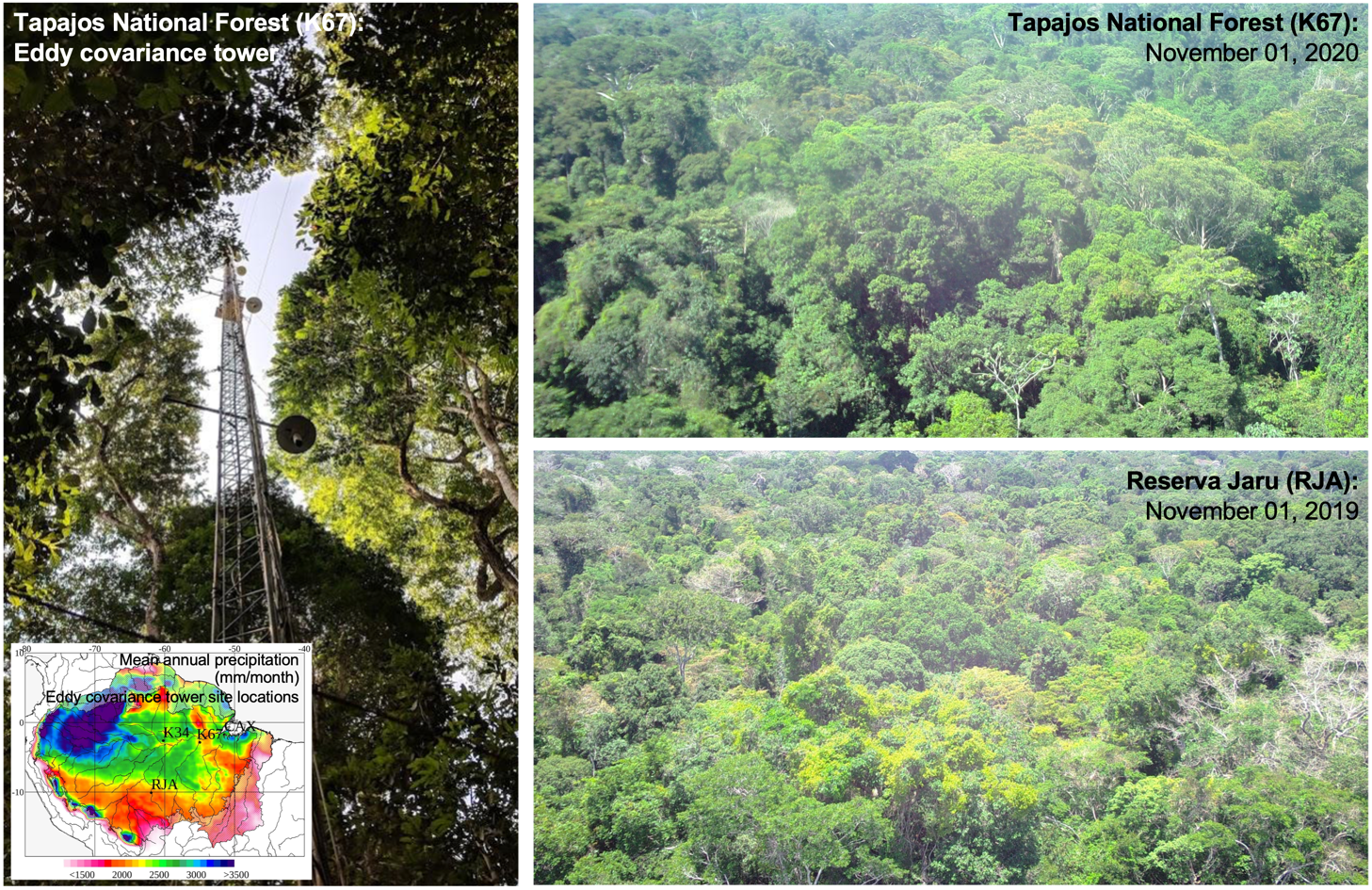 Four eddy covariance flux towers across the Amazon basin measure exchanges of water, energy, and carbon between the forest and the atmosphere to understand how tropical forests will respond to climate change.

Forests help regulate the exchange of water and carbon dioxide between the land surface and the atmosphere. However, their influence depends on how efficiently forests access and use light and water during the year. Scientists used measurements from four flux towers in tropical forests of the Amazon to evaluate a predictions of carbon, water, and energy exchange from four  forest simulation models, and found that models predict Amazon forests dry-up too often and too quickly and  reflect more of the incoming solar radiation, when compared to observations.

The ability to accurately predict the response of tropical forests to future climate scenarios depends on appropriate understanding and representation of key ecosystem processes. The inconsistencies between model projections and real-world measurements of tropical forest carbon, water, and energy fluxes identified in this study help point to a need to improve representation of the processes by which tropical trees use, store, and move water and reflect light in current models to enable accurate predictions of the Earth system.

Using data collected in four eddy flux towers across the Amazon, scientists quantified the seasonal cycle of sensible heat flux, evapotranspiration, emission of thermal infrared radiation, and optical properties of forest canopies. The seasonal cycle of these parameters was also simulated  using four terrestrial biosphere models that are often used to predict the future of the Amazon (namely IBIS, ED2, JULES, and CLM3.5). Comparing model predictions with tower measurements revealed that most models predict a strong seasonality of the Bowen ratio (i.e., ratio between sensible and latent heat flux), and overall low water use efficiency. Consequently, models predicted that Amazon forests experience more frequent water stress than had been observed. Likewise, models predicted that forest canopies would reflect more light than observed.  Three possible explanations for such differences are suggested. First, models do not represent when leaves shed or replace leaves, which may bias the canopy reflectance. Likewise, models seem to exaggerate the canopy interception of rainfall, which reduces the predicted soil available water. Finally, inaccurate estimates of water stress lead to discrepancies between predicted and observed outgoing longwave radiation. These findings can be used as references for future model development.

This research was supported as part of the Next Generation Ecosystem Experiments-Tropics (NGEE-Tropics), funded by the Office of Biological and Environmental Research (BER) in the U.S. Department of Energy’s (DOE) Office of Science. This research was also funded by the Gordon and Betty Moore Foundation “Simulations from the Interactions Between Climate, Forests, and Land Use in the Amazon Basin: Modeling and Mitigating Large-Scale Savannization” project, and the National Aeronautics and Space Administration (NASA) through the NASA LBA-DMIP project.