Roots Mediate the Effects of Snowpack Decline on Soil Bacteria, Fungi, and Nitrogen Cycling in a Northern Hardwood Forest 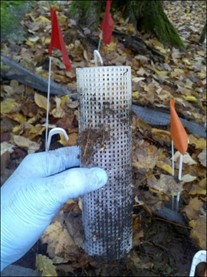 Rising winter air temperatures are reducing seasonal snow cover in many temperate ecosystems. Such reductions in snow depth may affect soil bacteria and fungi directly, but also affect soil microbes indirectly through effects of snowpack loss on plant roots. However, the role of plant roots in moderating the impact of snowpack loss on bacterial or fungal communities remains poorly resolved.

Declining winter snowpack and impacts to plant roots have direct effects on the diversity and abundance of soil bacteria and fungal communities with important consequences for nitrogen (N) cycling in northern hardwood forests.

Studies have investigated the effects of climate-induced warming on soil biogeochemical processes, with temperature increases affecting snow-dominated systems through reduced snowpack and early onset of melt. To date, few studies have focused on the role that roots play in enhancing or moderating nutrient cycling in soils by bacteria and fungi. To address this knowledge gap, root ingrowth and exclusion cores (216 cores total) were incubated for 29 months at the Hubbard Brook Experimental Forest in central New Hampshire, which has experienced a decline in winter snowpack over the past 50 years. Both a declining winter snowpack and effects of reduced snow on plant roots had a direct effect on the diversity and abundance of soil bacteria and fungal communities and interacted to reduce rates of soil N cycling in this northern hardwood forest. Such results are broadly relevant to other temperate ecosystems where climate change and climate disturbance are affecting snowpack, such as many mountainous regions worldwide.

Funding for this study was provided by a student award from the Boston University Biogeoscience program and from the National Science Foundation (NSF-DDIG DEB-1406521, NSF DEB-1149929, 1406521, 1114804, and 1637685).  Pat Sorensen was in part supported by the Watershed Function Scientific Focus Area funded by the U.S. Department of Energy, Office of Science, Office of Biological and Environmental Research under Award Number DE-AC02-05CH11231. Jorge Duran was supported by the Fundação para Ciência e Tecnologia (IF/00950/2014). Hubbard Brook is a Long-Term Ecological Research site supported with funding from the National Science Foundation.