How Floods Start and Their Recent Trends 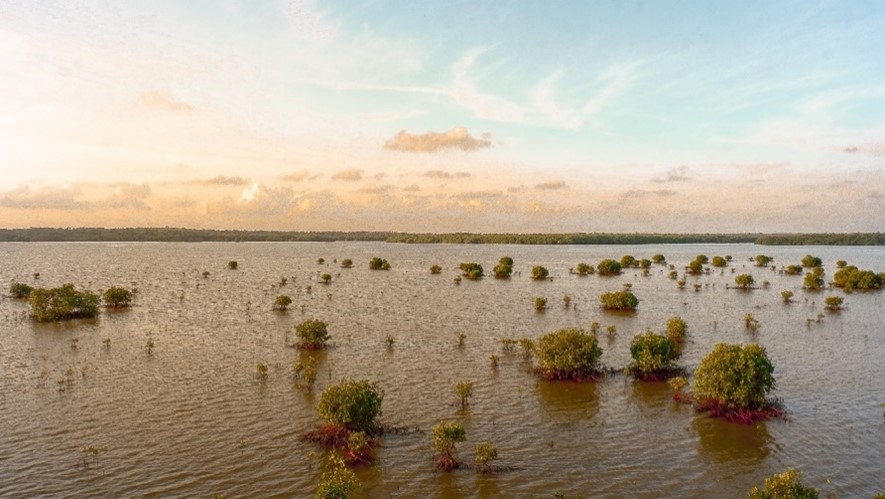 Floods account for a significant and increasing number of reported natural hazards globally. As extreme precipitation is projected to increase in a warmer climate, there is an urgent need to improve understanding and modeling of floods to improve flood prediction and inform infrastructure planning. Analyses of flood characteristics have focused on using streamflow data, but flood inundation area has more direct societal and ecological implications.

A team led by scientists at the U.S. Department of Energy’s Pacific Northwest National Laboratory calibrated and evaluated a newly developed floodplain inundation model in the Energy Exascale Earth System Model (E3SM). Global simulations of flood inundation area for 1953-2004 revealed significant changes in flood generation mechanisms in some basins around the world. In the Amazon basin, for example, increasing concentration of extreme rainfall events within the wet season has increased its contribution to floods in the recent decades by synchronizing the occurrence of extreme rainfall more often with saturated soil in the wet season.

Despite the complex and highly dynamic nature of flood processes, this study demonstrated the ability of a physically based inundation model in E3SM for realistic simulation of floodplain inundation. Global simulations of flood inundation provided insights on the mechanisms for floods and their trends in major basins around the world.

Generally, soil moisture and monthly maximum daily rainfall are the dominant drivers of floods in tropical basins while monthly maximum daily snowmelt is the dominant driver in high latitude basins. From 1953-1982 to 1975-2004, significant changes in flood generation mechanisms are found in some basins such as Amazon, Lena, Yenisey, and Kolyma. Analysis of the rainfall seasonality and water balance at grid scale reveals during the later period, the occurrence of extreme rainfall has concentrated more in the wet season in the Amazon, which increases the co-occurrence of extreme rainfall and wet soil to produce flooding.  Fewer extreme rainfall events and increasing soil moisture reduced the contribution of monthly maximum rainfall and increased the role of monthly maximum snowmelt in floods in the Lena and Yenisey basins, respectively. Lastly, increased soil moisture and frequency of large monthly maximum snowmelt reduced the contribution of the latter to floods in the Kolyma basin. This study demonstrates the usefulness of the floodplain inundation model in E3SM for understanding floods and predicting their future changes.

This research was part of the Earth System Modeling Program Area through the Energy Exascale Earth System Model (E3SM) project, supported by the Office Biological and Environmental Research (BER) within the U.S. Department of Energy’s (DOE) Office of Science. Research was also supported by the Environmental System Science (formerly Terrestrial Ecosystem Science) program through the Next Generation Ecosystem Experiment (NGEE) Tropics project.