New analyses of hydraulic architecture, species distributions, and mortality across the Isthmus of Panama. 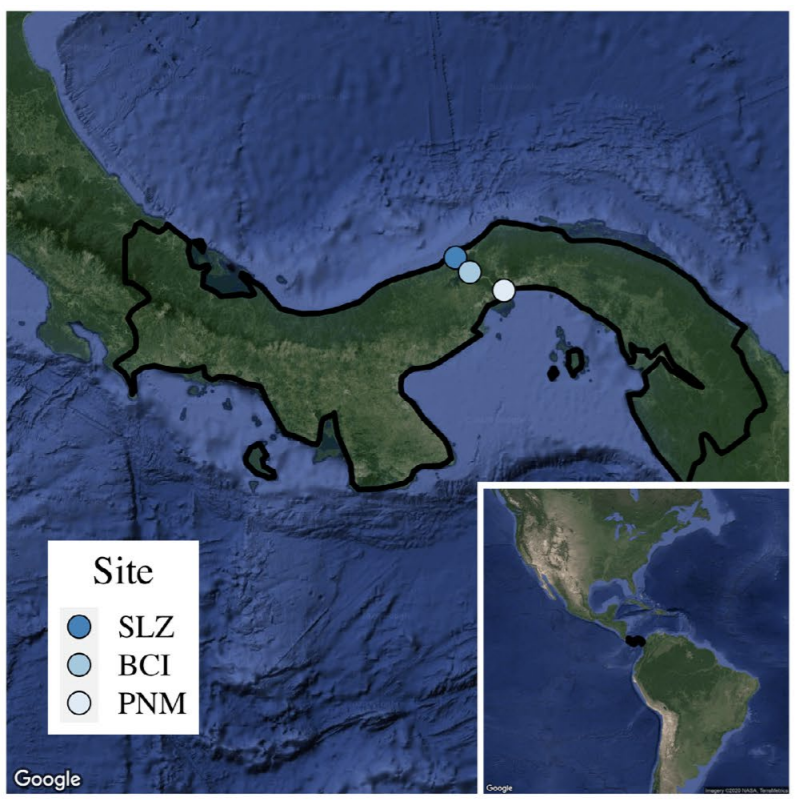 The location of field sites across the Isthmus of Panama where measurements of hydraulic architecture, species distributions, and species mortality rates from a recent drought were measured.

We compiled literature values for hydraulic traits that regulate water stress, species distributions, and species mortality rates for 27 species that live across the moisture gradient formed by the Isthmus of Panama. The hydraulic traits investigated included parameters such as the safety a plant maintains from hydraulic failure during drought, and associated traits that regulate these safety margins. Correlation and cluster analyses were conducted to investigate if any traits were correlated with species distributions or mortality rates.

Tree mortality in tropical forests has been increasing in some regions, with the primary culprit thought to be drought. Increasing tree mortality results in a decrease in the potential carbon sink of tropical forests, which has major implications for the global carbon budget. This paper provided a novel test of the relationship between mortality, species distributions, and tree hydraulic architecture. The results of this study provide new information on the regulation of plant mortality and distribution in tropical forests, and guide future modeling efforts intended to predict the future tropical carbon budget.

We discovered that hydraulic safety margins, that is, the risk of exceeding stress thresholds that lead to fatal dehydration, were not correlated with tree mortality rates measured during an El-Nino drought. However, these traits were correlated with species distributions across the moisture gradient, suggesting that long-term acclimation to drought does manifest through avoidance of hydraulic failure.

This work was supported by the Next-Generation Ecosystem Experiments (NGEE Tropics) projects that was supported by the Office of Biological and Environmental Research in the Department of Energy, Office of Science. AR and SPS were supported by the United States Department of Energy contract to Brookhaven National Laboratory. CG was supported by the Swiss National Science Foundation SNF. BTW was supported by the National Institute of Food and Agriculture, U.S. Department of Agriculture, McIntire Stennis project under LAB94493. The BCI forest dynamics research project was made possible by National Science Foundation (NSF) grants to Stephen P. Hubbell, with support from the Forest Global Earth Observatory, the Smithsonian Tropical Research Institute, the John D. and Catherine T. MacArthur Foundation, the Mellon Foundation, the Small World Institute Fund, and numerous private individuals, and through the hard work of over 100 people from 10 countries over the past three decades. The plot project is part the Forest Global Earth Observatory (ForestGEO), a global network of large-scale demographic tree plots. The CTFS R Package was developed with the support of NSF to Stuart J. Davies through the NSF-IRCN program on the Dimensions of Biodiversity.