The Role of Snow Timing in Permafrost Degradation

Reliable projections of air temperature and total snowfall may not be sufficient to understand permafrost degradation. 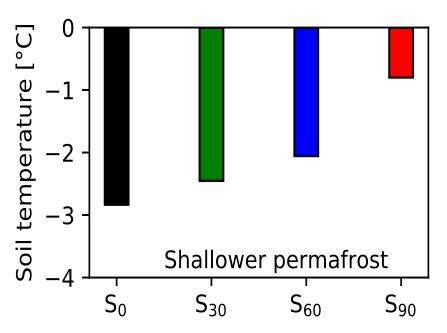 Snapshot of the annual average ground temperature in four scenarios. When snowfall arrives early in the winter, permafrost degrades.

Permafrost-affected regions store a huge amount of frozen organic carbon. The fate of the stored organic carbon depends on the thermal stability of those regions. This study shows that the timing of snow accumulation, with stable air temperatures and snow magnitude, can significantly impact permafrost degradation. Thereby, snowfall timing has the potential to accelerate the release of stored carbon to the atmosphere and permafrost thermal hydrology.

Computer models allow the design of experiments in a well-controlled environment, an  impossibility in observational and manipulated experiments in field studies. In this work, snow manipulation numerical experiments using fully coupled process-based integrated surface/subsurface thermal hydrology models show that even small shifts in the timing of snow accumulation can significantly affect permafrost degradation. In the study’s numerical scenarios, simulations were forced by the same meteorological data, except the snow precipitation, which was systematically altered to change timing of snowfall. The scenarios represent subtle shifts in snow timing, but the snow onset/melt days, the end of winter snowpack depth, and the total annual snow precipitation are the same in all scenarios. The simulations show that subtle shifts in the timing of snowfall can affect the active layer and even lead to talik formation when snowfall arrives earlier in the winter. The team found that the shifts in snow timing have a stronger impact on wetter regions as compared to drained regions. This study highlights the importance of understanding potential changes in winter precipitation patterns for reliable projections of active-layer thickness in a changing Arctic environment.

This work was supported by the Next-Generation Ecosystem Experiments (NGEE) –Arctic project.