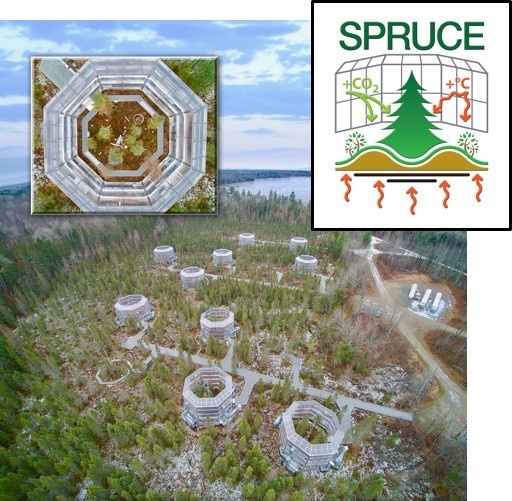 The Spruce and Peatland Responses Under Changing Environments (SPRUCE) team at Oak Ridge National Laboratory used in in situ whole-ecosystem manipulations to evaluate peatland carbon cycle changes to a range of warming conditions and elevated carbon dioxide (CO2). Warming caused variable responses for vegetation and losses of both CO2 and methane (CH4), resulting in an ecosystem carbon loss response rate of 31.3 grams of carbon per m2 per year (g C·m−2·year−1)).

For the studied levels of warming, carbon losses far exceed historical carbon accumulation rates. Land surface ecosystem models are capable of capturing carbon cycle responses to temperature under ambient CO2 conditions but overpredict sensitivity to elevated CO2 compared to the effect of warming as observed at the SPRUCE experiment.

Northern bogs and fens have accumulated carbon in deep deposits of peat—dead and decaying plant material high in carbon content—for millennia under wet, cold, and acidic conditions. The SPRUCE team experimentally warmed and added CO2 to a series of bog plots in northern Minnesota to investigate whether the altered environment would lead to the increased decomposition and loss of carbon from bogs to the atmosphere, where it would contribute further to warming. The team found that warming changed the nature of these bogs from carbon accumulators to carbon emitters—where carbon was increasingly lost to the atmosphere in the form of greenhouse gases CO2 and CH4 as the level of warming increased. This carbon loss was faster than historical rates of carbon accumulation, demonstrating the significant impact of global warming on naturally stored carbon. Improved peatland ecosystem models are capable of capturing the temperature responses but overpredict responses to elevated CO2.

The authors are supported by the Office of Biological and Environmental Research (BER), within the U.S. Department of Energy Office of Science. Oak Ridge National Laboratory (ORNL) is managed by UT-Battelle, LLC, for DOE under contract DE-AC05-100800OR22725. The U.S. Department of Agriculture Forest Service funded contributions of SDS and RKK in support of the Spruce and Peatland Responses Under Changing Environments (SPRUCE) Experiment. Contributions by JPC were funded by BER’s Terrestrial Ecosystem Science Program, under DOE contracts DE-SC0007144 and DE-SC0012088.