Whole-soil warming shows that even the large, old, and presumably stable stores of soil carbon are vulnerable to warming and could amplify climate change. 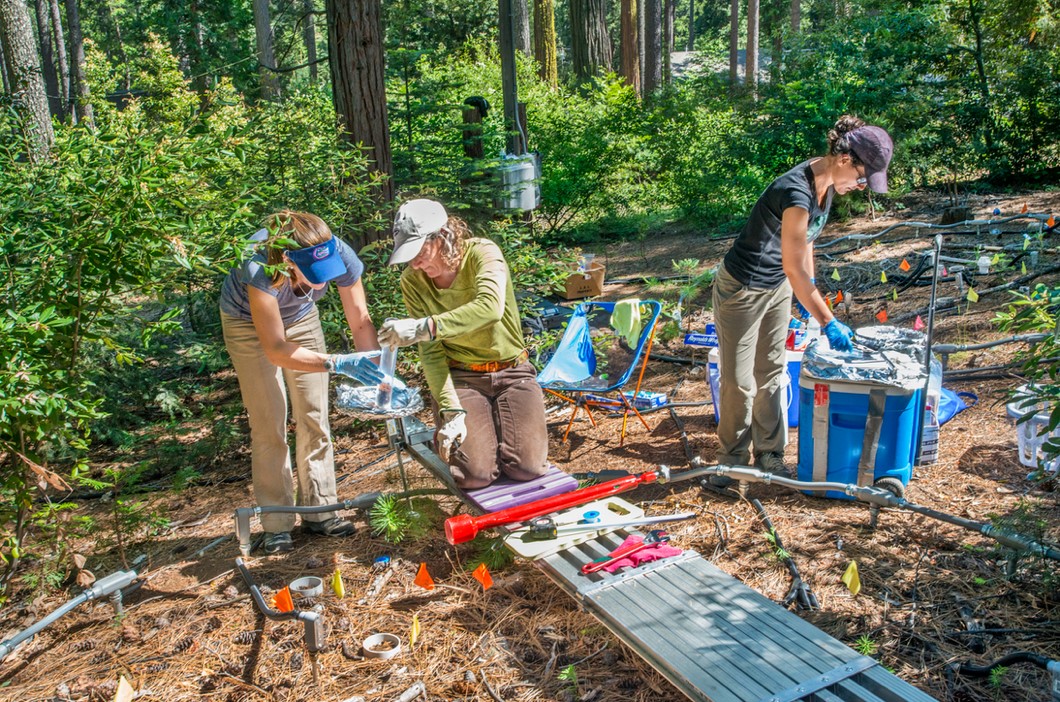 [© The Regents of the University of California, through the Lawrence Berkeley National Laboratory, reused with permission.]

Soils contain twice as much carbon as the atmosphere, and deeper soils (more than 20 centimeters deep) are believed to account for roughly half of soil carbon. While it is known that warmer temperatures can stimulate microbial decomposition of this organic soil carbon, scientists are uncertain whether warming leads to a significant loss of soil carbon stocks and consequently an increase in atmospheric carbon dioxide (CO2) levels. This study found that five years of experimental warming led to a significant reduction in carbon stock stored in deep forest soils, providing empirical confirmation for possible positive feedback to warming.

This study provided some of the first evidence that warmer temperatures lead to a significant drop in the stored carbon stock in deep forest soils. This result suggests that there can be net transfer of carbon from the soil, where it was sequestered as organic carbon, to the atmosphere, where it is released as a greenhouse gas. The experiment, in California’s Sierra Nevada Forest, found that the carbon content in subsoils dropped 33% over five years. In addition, warming the soil led to a 30-35% increase in CO2 emissions each year. The world’s forests are currently a net sink of atmospheric  CO2 and have the potential to sequester large amounts of atmospheric  CO2 in coming decades. However, a better understanding of how deep soils will respond to warming is needed to accurately predict and plan for long-term changes. This cycle, if confirmed over longer time scales, could constitute positive feedback to climate change.

Subsoils below 20 cm are an important reservoir in the global carbon cycle, but little is known about their vulnerability under climate change. Scientists conducting this field experiment artificially heated plots of soil down to 1 meter deep by 4°C, which is the amount of heating projected by century’s end in business-as-usual climate scenarios. Heating mimicked natural daily and seasonal cycles. The scientists measured a statistically significant loss of subsoil carbon (−33 ± 11%) in warmed plots of a conifer forest after 4.5 years of whole-soil warming (4°C). The loss of subsoil carbon was primarily from unprotected particulate organic matter. Warming also stimulated a sustained 30 ± 4% increase in soil CO2 efflux due to increased CO2 production through the whole-soil profile. These field observations of a decline in subsoil carbon stocks with warming are strong evidence for a positive soil carbon-climate feedback, which could not be concluded based on increases in CO2 effluxes alone. The high sensitivity of subsoil carbon and the different responses of soil organic matter pools suggest that models must represent these heterogeneous soil dynamics to accurately predict future feedbacks to warming.

This work is supported by the Environmental System Science (ESS) program (formerly the Terrestrial Ecosystem Science program) in the Office of Biological and Environmental Research (BER), within the U.S. Department of Energy’s (DOE) Office of Science, under award DE-SC-0001234, Swiss National Science Foundation project 200021_172744, and Colorado State University.