Effects of Hurricane María on the Forests of Puerto Rico 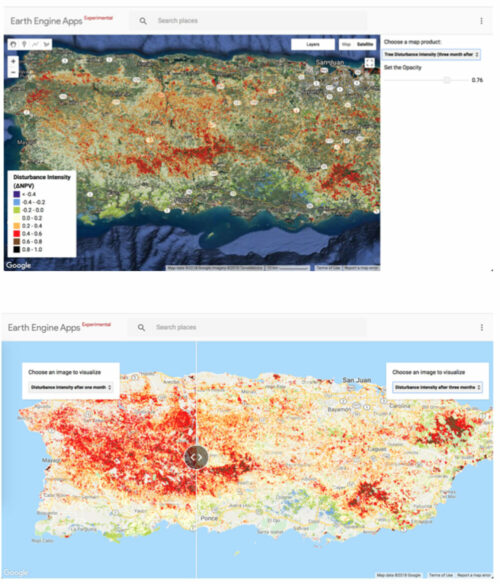 Previously, scientists need to step into the field and measure the forest damage after hurricanes. It is a difficult job and also takes long time to get only a small plot of data. This research mapped the forest disturbance on the landscape scale, so we can quickly get access to the damage level on the whole island of Puerto Rico. To better understand the disturbance level, we also explored a number of factors that affect the spatial variation of the disturbance intensity.

Widely recognized as one of the worst natural disaster in Puerto Rico’s history, hurricane María made landfall on September 20, 2017 in southeast Puerto Rico as a high-end category 4 hurricane on the Saffir-Simpson scale causing widespread destruction, fatalities and forest disturbance. This study focused on hurricane María’s effect on Puerto Rico’s forests as well as the effect of landform and forest characteristics on observed disturbance patterns. Our analyses showed that forest structure, and characteristics such as forest age and forest type affected patterns of forest disturbance. Among forest types, highest disturbance values were found in sierra palm, transitional, and tall cloud forests; seasonal evergreen forests with coconut palm; and mangrove forests. For landforms, greatest disturbance metrics was found at high elevations, steeper slopes, and windward surfaces. As expected, high levels of disturbance were also found close to the hurricane track, with disturbance less severe as hurricane María moved inland. This study demonstrated an informative regional approach, combining remote sensing with statistical analyses to investigate factors that result in variability in hurricane effects on forest ecosystems.

This research was supported as part of the Next Generation Ecosystem Experiments-Tropics (NGEE-Tropics), funded by the U.S. Department of Energy, Office of Science, Office of Biological and Environmental Research under contract number DE-AC02-05CH11231.