Why Is Woody-Plant Mortality Increasing? Mechanisms Linking Mortality to Climate

A synthetic review sheds light on how and why plants are dying more under a warming climate. 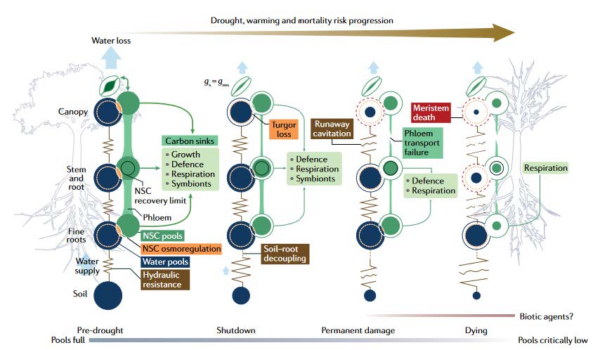 A healthy plant (left) has relatively full pools of water and carbon, enabling support of critical functions. As drought and warming proceed (left to right), these pools become critically low due to lost water and carbon supplies, leading to mortality.

This study reviewed the literature to identify key mechanisms underlying warming-induced woody-plant mortality, including trees and shrubs, and presented a testable framework that yields insight into the drivers of plant death as well as how to better model these processes. Ultimately, mortality under drought, rising temperature, and rising carbon dioxide result from depletion of water and carbon stores, leading to irreversible dehydration and the inability to maintain metabolism. Warming exacerbates these storage declines, while elevated carbon dioxide has mixed impacts. The net result of the increasing rate and severity of warming and drought overwhelms the benefits of elevated carbon.

Plant mortality is rising globally, leading to negative impacts on ecosystem services of societal value, including economic, aesthetic, and ecological consequences. Plant mortality is rising in concert with increasing droughts, warming, and carbon dioxide, but the mechanisms driving the increased mortality are poorly known. This knowledge gap leads to large challenges for predicting the future of terrestrial ecosystems, including their role in water, carbon, and nutrient cycling. This study integrated the literature on plant mortality and subsequently generated a synthetic and testable hypothesis framework describing the mechanisms underlying plant death in a warming and drying world.

Increasing rates of woody-plant mortality, including trees and shrubs, presents a large scientific challenge due to an insufficient understanding of the cause of rising plant loss. Plant mortality reduces carbon uptake and increases carbon loss, promoting a decline in terrestrial carbon storage. Despite these consequences, predicting plant mortality is limited by a lack of knowledge of the underlying mechanisms, their response to climate, and their integration into models. Here, scientists reviewed the literature to generate a synthetic hypothesis framework that pinpoints key mechanisms driving mortality under a changing environment. The result of this study is a roadmap for future research, including the provision of a set of testable hypotheses that will rapidly increase understanding and identification of key mechanisms that should be included in process models to enable more accurate representation of the impacts of climate change on plant survival. Carbon and water stores are depleted under changing climate, with some amelioration due to rising carbon dioxide. The decline in these stores not only leads to failure to maintain hydration and metabolism but can also promote death outright or through failure to defend against attacking biotic agents. Acclimation can promote survival to an extent. Determining the net impacts of rising carbon dioxide versus drought and warming remain a major science challenge.