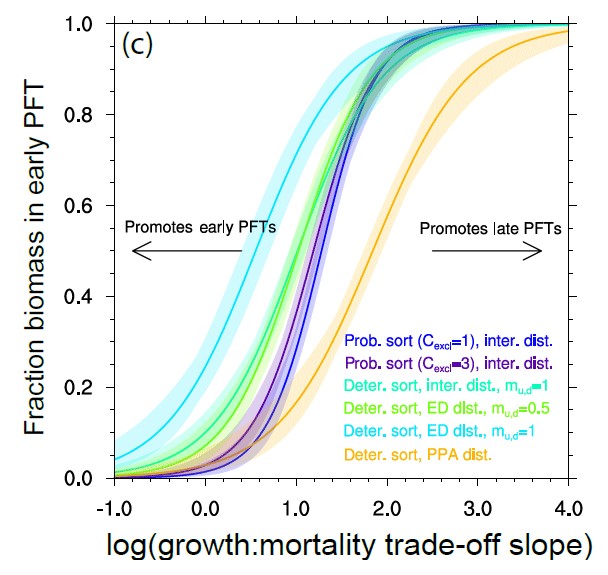 Proportion of early- and late-successional plants as controlled by disturbance and competition parameters.

Tropical forests are a critical ecosystem in governing terrestrial feedbacks to global change. Representing the complex ecological dynamics that determine these processes is a crucial gap in Earth system models. Researchers have developed the FATES model to explore and represent complex ecological dynamics and are testing the model at tropical forest field sites to explore how the representation of plant traits and ecosystem parameters govern forest structure and function.

This article represents a first benchmarking and parameter sensitivity of the full-complexity FATES model using multiple dimensions of plant trait variation alongside other ecosystem parameters. The team finds that the representation of competition fundamentally alters tropical forest function, and that parameters controlling the dynamics of competition, such as disturbance rate and intensity, control ecosystem structure and function.

Tropical forests are a critical and dynamic ecosystem, but the ecological complexity of these regions is not represented in existing Earth system models. A research team developed the FATES model for use in E3SM to address this modeling gap. The team tested FATES within the E3SM Land Model (ELM) to explore how plant trait variation and competition between different plant functional types at a tropical forest site governs model predictions of the function and structure of the forest. Using a set of 12 plant traits whose variability has been observed at the field site, the team used ensembles of model runs to explore both the trait variation and how structural differences in the representation of competition determine model outcomes. These were compared to observations at the site. The team found that adding larger numbers of competing plant types increases the productivity of the forest and thus points to a need to better represent tradeoffs that prevent any one type from dominating an ecosystem. They also found that the balance between early successional and late successional functional types is highly sensitive to the representation of disturbance intensity, disturbance extent, and the degree of determinism in light competition by the trees, thus pointing to the need to focus on these processes in testing and benchmarking the model.

This research was supported as part of the Next Generation Ecosystem Experiments (NGEE)—Tropics, funded by the Office of Biological and Environmental Research (BER), within the U.S. Department of Energy’s (DOE) Office of Science. The PI also acknowledges support from the DOE Early Career Research Program (ECRP). Lawrence Berkeley National Laboratory (LBNL) is managed and operated by the Regents of the University of California under prime contract number DE-AC02-05CH11231.