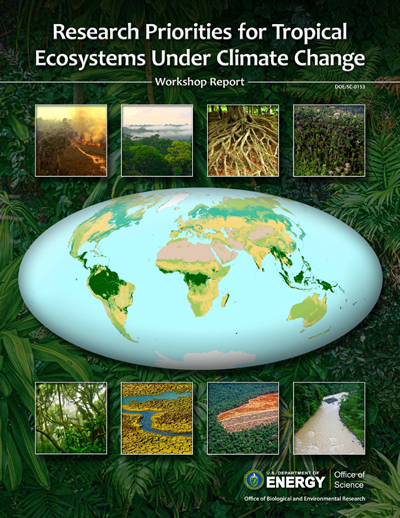 The goal of the Research Priorities for Tropical Ecosystems Under Climate Change Workshop was to engage the scientific community in an open discussion to identify critical scientific gaps that limit the ability to represent tropical ecosystems in Earth system models (ESMs) and that demand immediate field investigations. The results of this workshop will inform the Department of Energy’s Office of Biological and Environmental Research (BER) as it plans and prepares for a tropical Next-Generation Ecosystem Experiment (NGEE). The NGEE approach uses model-informed and -inspired field studies resulting in iterative refinement of high-resolution, predictive ESMs. The overall goal of BER’s decade-long investment will be to investigate tropical ecosystems and their vulnerabilities to climate change and to improve the representation of these systems in ESMs. Specifically, the workshop

These issues were discussed with an emphasis on three major tropical ecosystem locations that may be candidate regions for NGEE Tropics field studies: the Amazon Basin, Congo Basin, and Southeast Asia.