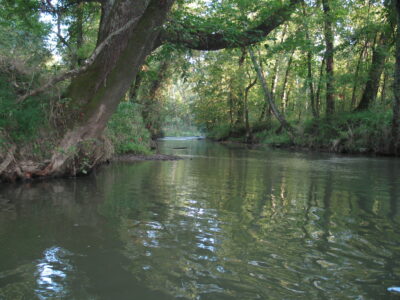 SFA Study Area. East Fork Poplar Creek (EFPC), which is part of the 40,910 ml2 Tennessee River basin, is the representative test bed system being studied. This watershed and its associated streams represent the most intensively used freshwater Water Resource Region in the contiguous United States, with estimated withdrawals of >280,000 gallons/day/ml2.

Freshwater resources supplied by streams and their surrounding watersheds are vital to the global economy. Before the 20th century, the water supplied by these systems was sufficient to support a range of services (e.g., energy production and human consumption). However, demand for these resources has grown dramatically because of population growth, industrialization, and expansion of irrigated agriculture. Furthermore, as demand increases, the availability of clean water is diminishing because of severe pollution from anthropogenic releases of nutrients and trace metals such as mercury (Hg). Mercury is a pervasive global pollutant that can be methylated to form toxic methylmercury (MeHg), which bioaccumulates in aquatic food webs, endangering humans and other biota. Developing scientific approaches that enable a deeper understanding of pollutant cycling in streams and their surrounding watersheds is critical for preserving freshwater resources.

To enable a predictive understanding of Hg cycling in stream systems both locally and globally, the Biogeochemical Transformations at Critical Interfaces in a Mercury Perturbed Watershed Science Focus Area (SFA) is providing foundational insight on exchange and feedback processes occurring at critical interfaces that control mercury fate and transformation. This project, led by Oak Ridge National Laboratory, is supported by the Subsurface Biogeochemical Research program within the Department of Energy’s (DOE) Office of Biological and Environmental Research (BER).

System-level understanding of stream function has evolved from one of a passive conduit draining its watershed to one that hosts hot spots of biogeochemical transformations that exert a controlling influence on water quality and ecosystem health. Deeper understanding is needed, however, of the mechanisms operating in transient storage zones (TSZs) surrounding the stream channel where prolonged contact times between water and sites of high biogeochemical activity occur. TSZs are locations where the downstream movement of water is delayed in comparison to the main channel flow. Metabolically active transient storage zones (MATSZs), a subset of TSZs that are microbially active, are important hot spots where a substantial portion of carbon, nutrient, and trace metal processing occurs, influencing stream biogeochemistry and, ultimately, downstream water quality. 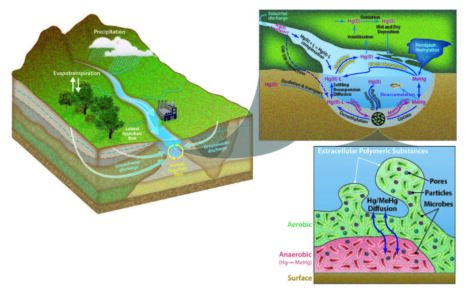 Research Elements of the Science Focus Area. Transient storage zones (TSZs) depicted in the schematic are broadly defined as surface and subsurface locations (both metabolically active and inactive). TSZs significantly delay the downstream movement of water flowing through those locations (e.g., creek margins, periphyton biofilms, hyporheic zones, and bank storage), as compared to the flow pace in the stream channel. Metabolically inactive zones (e.g., surface water eddies) are not rendered or discussed here. Shown in the composite of research elements are metabolically active TSZs (MATSZs)— “hot spots” for biogeochemical transformations, such as of mercury and nutrients, that can exert a controlling influence on downstream water quality. Although MATSZs typically are associated with the interstitial spaces of a hyporheic zone streambed, the pore spaces (inset, bottom) in the microbiome of in-stream periphyton biofilms have received far less attention from researchers.

This SFA project has made substantial progress in fulfilling its Phase I objective to determine the fundamental mechanisms and environmental factors controlling Hg biogeochemical transformations at critical interfaces in terrestrial and aquatic ecosystems. Phase II aims to determine the fundamental mechanisms and environmental controls on Hg biogeochemical transformations in metabolically active transient storage zones (MATSZs) in low-order streams and addresses the project’s 9-year science challenge and goal. 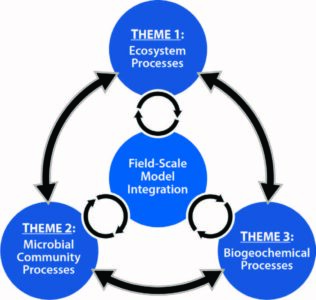 By developing a deeper understanding of mercury speciation and fluxes in streams, this system science SFA is producing new knowledge and tools that could have a global impact. SFA researchers are deriving comprehensive, molecular-scale data that, when coupled to field-scale models, will enable a deeper understanding of Hg speciation and fluxes in streams and their surrounding watersheds. This capability will improve predictions of Hg cycling not only in local streams but in numerous other impaired streams worldwide. This foundational information is important for addressing the global increase in mercury-contaminated sites, a pressing environmental challenge facing the United Nations Environment Program, as well as remediation of mercury contamination on DOE’s Oak Ridge Reservation.

Additionally, while Hg and EFPC serve as a representative use cases, the information generated and the integrated, multiscale approach being pioneered by this SFA will form a transformational paradigm that can be extended to understanding biogeochemical processes that affect the fate, toxicity, and fluxes of other trace elements (e.g., radionuclides from DOE sites and transition metals and selenium from mined landscapes).

Steep biogeochemical gradients across the subsurface-surface interface where anoxic water discharges to the surface water. (2017) 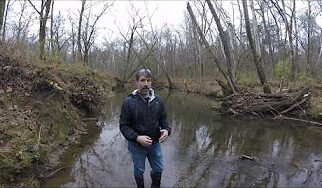 An in-field interview with Dr. Jason Demers (University of Michigan) in which he describes a collaborative project he is leading. (2017) 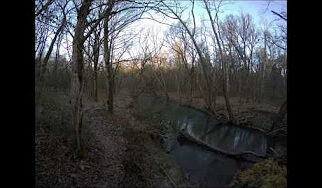 Time-lapse video of the setting moon and rising sun at one of our experiment stations on lower East Fork Poplar Creek, Tennessee. (2017) 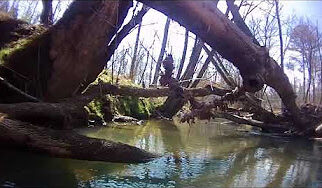 A kayak tour of a ~2 kilometer reach of East Fork Poplar Creek, Tennessee. Playback speed is 2× real time; no audio. (2013)